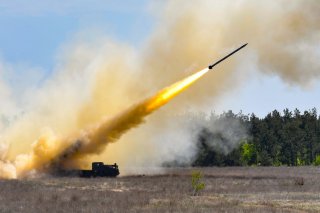 Her'e's What You Need to Remember: The new super-large MLR extends the range and explosive force of Pyongyang’s existing non-nuclear arsenal.

The projectiles launched from Pyongannam-do, a province around Pyongyang, The New York Times reported. The munitions flew up to 230 miles before landing in waters between North Korea and Japan, the South Korean military said in a statement.

The hermit state earlier had tested apparently the same 370-millimeter-diameter rockets in September and August 2019, explained Gabriel Dominguez Cespedes, an editor at Jane’s.

“When North Korea first tested its super-large MRL system on Aug. 24, each of the two projectiles flew about 380 kilometers at a top speed of Mach 6.5 and reached an altitude of about 97 kilometers before falling into the Sea of Japan,” Dominguez Cespedes wrote.

The “super-large” MRL system, which is comprised of an eight-by-eight launcher vehicle fitted with four launch tubes, was then tested on Sept. 10 from an area in North Korea’s western city of Kaechon, South Pyongan Province, with the two projectiles flying about 330 kilometers and reaching an altitude of around 50 to 60 kilometers, according to the [South Korean joint chiefs of staff].

The caliber of the projectiles used in the “super-large” MRL appears to be larger than 370 millimeters. The weapons, which both South Korea and Japan refer to as short-range ballistic missiles, seem to have small control surfaces on their noses: a feature seen on guided artillery rockets used in North Korea and other countries.

The latest test-firings come after the South Korean military kicked off its annual “Hoguk” field training exercise on Oct. 28, which it says is purely defensive in nature. The two-week-long drills began at the same time as South Korea’s “Taeguk” command-post exercise.

The missile launched on Oct. 2 landed within Japan’s exclusive economic zone, a provocative challenge to a key United States ally. Japan’s military said it did not appear that the projectiles tested on Thursday had reached that zone.

“We express our strong concern about the North’s launching of short-range projectiles while we analyze its motive,” the office of South Korea’s president, Moon Jae-in, said in a statement.

The launchings could be an effort by North Korea to prod the United States to get back to serious negotiations over its weapons program as it seeks relief from crippling sanctions.

North Korea has deployed around 13,000 artillery pieces and rocket launchers along the demilitarized zone between it and South Korea. Much of Pyongyang’s artillery is in range of the Seoul Greater Metropolitan Area, which begins just 25 miles south of the DMZ.

Some 10 million people live in the Greater Seoul Metropolitan Area and another 15 million reside just outside of the metropolitan area. South Korea has prepared underground shelters for Seoul’s entire population.