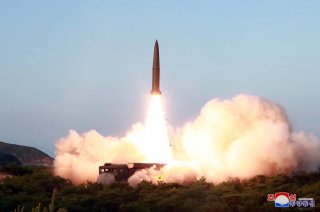 Here's What You Need to Remember: Joint Army-Navy crews operate the JTAGS system, which consists of a deployable towed shelter and a crew of fifteen soldiers and sailors which provides 24-hour, 365 day-a-year, all weather threat monitoring.

Defense contractor Northrop Grumman and the U.S. Army have enhanced the Joint Tactical Ground Station (JTAGS) capabilities in South Korea. The deployment of the JTAGS system will improve battle-space awareness and improve missile defense. This has marked the completion of phase one of the platform's modernization efforts.

JTAGS was first fielded in tactical shelters in 1997 to provide in-theater missile warning using data directly from satellite sensors. It receives and processes data that is directly down-linked from the Overhead Persistent Infrared constellation of satellites, which include the Defense Support Program and Space-Based Infrared System sensors, and other infrared satellite sensors. Networked sensor data is also provided from the Highly Elliptical Orbit sensor.

Additionally, 3D stereo processing of multiple sensors is performed to greatly improve tactical parameters. This technology was first developed at Northrop Grumman in 1994 and is still used today throughout the missile warning community. The system disseminates near-real-time warning, alerting and cueing information on ballistic missile launches and other tactical events of interest throughout the theater using multiple communications networks. This allows for the dissemination of data directly to combatant commanders.

As part of the phase one modernization efforts, Northrop Grumman and the U.S. Army installed JTAGS Block II in permanent facilities in Japan, Qatar, Italy, and most recently the Republic of Korea (South Korea). This has included updates to the hardware, software, and communication systems, as well as enhancements to cybersecurity and soldier-machine interface.

The deployments include soldier training as well as exercise support capabilities.

“This is a tremendous milestone in our decades-long mission of delivering missile warning and defense capabilities to protect our joint warfighters and allies," said Kenn Todorov, vice president and general manager, combat systems and mission readiness, Northrop Grumman. "JTAGS is vital to warfighters and of growing importance as we create true Joint All-Domain Command and Control systems, especially as we find new ways to integrate and leverage space-based assets.”

With the completion of phase one, the defense contractor has already begun executing phase two of the JTAGS Pre-planned Product improvement (P3I) modernization program. It includes the delivery of additional sensor processing capabilities and updating software architecture.

Joint Army-Navy crews operate the JTAGS system, which consists of a deployable towed shelter and a crew of fifteen soldiers and sailors which provides 24-hour, 365 day-a-year, all weather threat monitoring.

Peter Suciu is a Michigan-based writer who has contributed to more than four dozen magazines, newspapers and websites. He is the author of several books on military headgear including A Gallery of Military Headdress, which is available on Amazon.com. This article first appeared two months ago and is being republished due to reader interest.