Nothing to Fear? Thousands of North Korea's Tanks Are Outdated 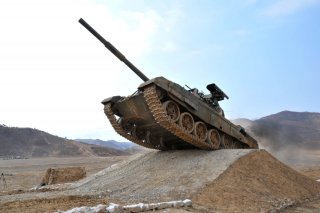 Key Point: North Korea may possess nuclear weapons, but many of its conventional forces are obsolute.

For decades, North Korea has maintained strong armored forces as part of the Korean People’s Army (KPA), with thousands of tanks today in service. North Korean tanks and mechanized infantry are meant to liberate the southern half of the peninsula in a lightning war that Pyongyang would win before the United States could bolster Seoul’s defenses. Unfortunately for the KPA, the end of the Cold War has halted the flow of modern tanks and other weaponry, dulling what was once a sharp sword.

North Korea’s use of armor goes back to the Korean War, when the 105th Armored Brigade—later 105th Armored Division—took part in the initial attack on South Korea. Trained and equipped by the Soviet Union, the 105th Division’s 120 T-34/85 tanks spearheaded the attack down the western half of the country. The tanks were particularly effective not only against the South Korean Army, which had few to no antitank weapons, but also against early U.S. ground forces. The 105th Division fought all the way south to the Pusan Perimeter, but was largely destroyed by early 1951, used up in the fighting with UN forces.

The effectiveness of even half-trained armor such as the 105th Armored Division made a strong impression on North Korean thinking, and after the war the KPA was rebuilt with considerable tank forces. Tank brigades and battalions are infused into North Korean divisions and brigades, giving them the ability to exploit successful local attacks with an immediately available tank force. The 105th Seoul Guards Armored Division, resurrected after the war and considered the most prestigious and modern unit, is equipped with two brigades of tanks and one brigade of mechanized infantry.

In terms of numbers, the strongest KPA tank force is the 820th Tank Corps. Consisting of five tank and two mechanized infantry brigades, the 820th is designed to exploit a breakthrough on the front lines. Ideally the corps would exploit a successful attack by other KPA forces that left the road open to Seoul. Together with the “Seoul Division,” the 820th would act swiftly to capture the capital city and knock South Korea’s civilian leadership out of the war.

North Korea’s tank forces were rebuilt after the war with fresh stocks of Soviet T-34/85 tanks. Between 1971 and 1977 the country received more than one thousand Soviet T-55 or Chinese-variant Type 59 tanks, enough to re-equip the 820th Corps and the 105th Division. These tanks are likely still in service, with non-tank infantry and combined arms units.

North Korea began to develop its own tanks in the 1980s. The Chonma-ho (“Flying Horse”) main battle tank is based on the 1960s-era Soviet T-62, which famously saw conflict in the 1973 Yom Kippur War. Chonma-ho is equipped with a 115-millimeter smoothbore main gun, 14.5-millimeter KPV antiaircraft machine gun and 7.62-millimeter coaxial gun. The cast tank turret has 214 millimeters of armor protection to the front, and frontal hull armor is estimated at 102 millimeters. This armor is believed to have been augmented with so-called explosive reactive armor to provide further protection against antitank missiles and other shaped-charge explosions.

Chonma-ho is not competitive with frontline U.S. and South Korean tanks, particularly the M1A2 Abrams and K1-88 and K2 Black Panther tanks, and has decisive disadvantages. Chonma-ho’s 115-millimeter gun cannot penetrate the frontal armor of any potential adversary tank, with the exception of South Korea’s fleet of M48A5K tanks, which are in the process of being retired. Conversely, it can be penetrated at any angle by U.S. and South Korean tanks. Although obsolete against other tanks, it is still dangerous to non-tank armored vehicles, such as the M2A3 Bradley and South Korean armored fighting vehicles.

A newer tank, the Pokpung-ho “Storm,” was first observed by the outside world in 2009–10, and seen most recently in Spring 2017 at a tank competition for tankers of the 105th Seoul Guards Armored Division observed by Kim Jong-un. Originally thought to be based on the 1970s-era Soviet T-72 tank, it is actually a North Korean attempt to recreate a T-72 type tank with T-62 technology. The hull and turret are simply T-62 designs, according to North Korea analyst Joseph Bermudez, possibly with an eye toward using China’s Type 85 tank as a “conceptual model.” The tank has improved turret armor on the frontal area.

Pokpung-ho appears to be armed with either a 115-millimeter or 125-millimeter main gun, a 14.5-millimeter machine gun, and a coaxial 7.62 machine gun. If the gun is the same caliber as the Chonma-ho the tank will be no more dangerous. A 125-millimeter gun, however, while unable to penetrate modern tanks such as the M1A2 and K2 frontally, might achieve a penetration against flank—and almost certainly rear—armor. The new Pukkuksong-2 medium-range ballistic missile appears to use a Pokpung-ho chassis as the basis of the missile transporter erector launcher (TEL).

Although very obsolete, Chonma-ho likely still serves as the mainstay of the North Korean armored force. Bermudez estimated in 2010 that Pokpung-ho tanks served only in the 105th Seoul Guards Armored Division. North Korea’s poor economy, a shift in priorities from conventional to nuclear arms, and now the use of the Ryu-Kyong Su tank factory to develop and produce missile TELs will all cut into conventional tank production. It is likely even the 820th Corps is only partially equipped with the newer Pokpung-ho.

North Korea appears to be aware of the deficiencies of its tank force. Tanks seen in this spring’s competition appeared outfitted with externally mounted twin machine-gun mounts, twin antitank guided-missile mounts, and surface-to-air missiles in a desperate attempt to keep them relevant on the battlefield. While the antitank missile could be useful against enemy tanks, other improvements appear mere window dressing. It is clear that barring outside assistance, North Korea’s armored-vehicle technology has hit a wall. The future appears bleak for North Korea’s tank forces.

Kyle Mizokami is a defense and national-security writer based in San Francisco who has appeared in the Diplomat, Foreign Policy, War is Boring and the Daily Beast. In 2009, he cofounded the defense and security blog Japan Security Watch. You can follow him on Twitter: @KyleMizokami. This article first appeared several years ago and is reprinted here due to reader interest.