Numbers Game: China Has the Worlds Biggest Armada, But Is It the Best? 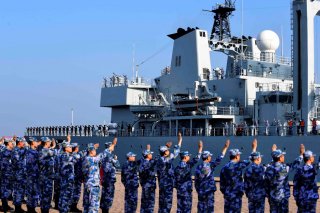 Here's What You Need to Remember: To counter the growing maritime threat posed by China, Esper also announced an ambitious plan to expand not just the size, but the strength and reach of the U.S. Navy with a range of unmanned and autonomous ships, submarines and aircraft. He has laid out a plan that would expand the U.S. fleet from the current 293 vessels to more than 355.

The People’s Republic of China has more warships than any other power in the world, including the United States, and it could have global naval dominance—at least in pure numbers—within a decade. However, The People's Liberation Army Navy (PLAN) still has considerable ways to go to match the power of the United States Navy, said Secretary of Defense Mark Esper.

“I want to make clear that China cannot match the United States when it comes to naval power,” Esper said at a RAND Corporation event last Wednesday, Business Insider reported.

“Even if we stopped building new ships, it would take the [People's Republic of China] years to close the gap when it comes to our capability on the high seas,” he added. “Ship numbers are important, but they don't tell the whole story. They do not address the types of ships and the capabilities of the vessels being counted; the skill of the crews that operate them; the prowess of the officers that lead them; or the ways in which we fight and sustain them.”

Those numbers could still be somewhat significant.

The People’s Liberation Army Navy (PLAN) is now building its third, and more importantly its largest, aircraft carrier. And unlike its two current carriers, this one is more than just a copy of Soviet-era designs. It will still be several years before the carrier is fitted out and years more before it will be ready to begin its sea trials, however, this third carrier will likely be finished far more quickly than the Shandong, the PLAN’s second carrier and the first to be built in China.

Beyond carriers the PLAN currently fields twenty modern Aegis-type destroyers, which are supported by eleven older (non-Aegis-type) destroyers. Of those twenty newer warships, eighteen were commissioned only within the past seven years.

To counter the growing maritime threat posed by China, Esper also announced an ambitious plan to expand not just the size, but the strength and reach of the U.S. Navy with a range of unmanned and autonomous ships, submarines and aircraft. He has laid out a plan that would expand the U.S. fleet from the current 293 vessels to more than 355.

The plan would require adding tens of billions of dollars to the U.S. Navy’s budget between now and 2045. Esper said that increasing the funding for shipbuilding is necessary to maintain readiness and sustain a significantly larger force.

“The future naval force will be more balanced in its ability to deliver lethal effects from the air, from the sea, and from under the sea,” Esper added.

The United States Navy currently operates eleven aircraft carriers, which is more than any other nation, but a fear is that lower-cost hypersonic missiles and powerful torpedoes, such as Russia's nuclear-armed Poseidon, could be “carrier killers.” This is where more but smaller ships could be crucial, but many could be optionally manned or even fully autonomous.

The future U.S. Navy could be one that would be made up of many smaller surface combatants that could present a major shift in how the United States conducts naval warfare in years and even decades to come Esper suggested.

Such a shift could is already seen in the new guided-missile frigate program, which includes ships with increased lethality, survivability and capacity to conduct distributed warfare; while new drones such as the Sea Hunter could be used to track and even hunt enemy submarines autonomously for months at a time.

Esper reaffirmed that China is the top U.S. security threat and added that the Indo-Pacific region will be a “priority theater” for the United States. “Not only is this region important because it is a hub of global trade and commerce, it is also the epicenter of great power competition with China.”