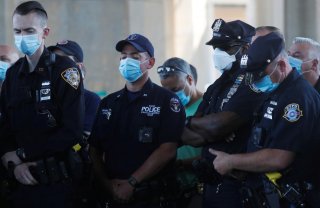 New York police officers have about 375 million “overwhelmingly positive” interactions each year, New York Police Benevolent Association president Mike O’Meara said, adding that politicians are “failing” them and the media is “vilifying” them.

He continued: “Stop treating us like animals and thugs, and start treating us with some respect. That’s what we’re here today to say. We’ve been left out of the conversation. We’ve been vilified. It’s disgusting.”

His comments came in the midst of riots and protests over the death of George Floyd, a black man who died after a Minneapolis police officer knelt on his neck for several minutes, video of the incident showed. Derek Chauvin, the officer, has been fired and arrested on second-degree murder and manslaughter charges.

Most police officers “roundly reject” what Chauvin did “as disgusting,” O’Meara said.

“I am not Derek Chauvin, they are not him. He killed someone, we didn’t. We are restrained,” O’Meara said. “We roundly reject what he did as disgusting, it’s not what we do.”

He added: “But what we read in the papers all week is that in the black community, mothers are worried about their children getting home from school without being killed by a cop. What world are we living in? That doesn’t happen.”

The New York Police Benevolent Association did not immediately respond to a request for comment from the Daily Caller News Foundation.