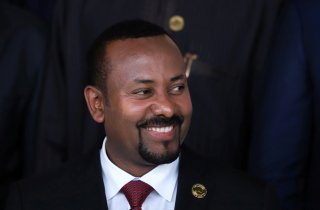 It’s two years since a surprise leadership change took place in Ethiopia. Introducing himself with a historic speech to the nation, the new Prime Minister Abiy Ahmed preached democracy as the only future for the country of more than 110 million.

The initial reforms were breathtaking. So much so that imagining democracy became justifiable. But Abiy’s administration inherited an extraordinary set of problems.

Apart from the challenge of democratising an authoritarian state, it had to deal with ethnic violence and conflicts. And massive internal displacement of citizens.

Two years later, the government seems to have controlled the issue of internally displaced people. Resettlement programs appear to have been mostly successful.

And there’s been considerable progress in ensuring peace and stability. News of violence is now mostly confined to two areas where the Oromo Liberation Army operates.

Beyond domestic politics, the volatile Horn of Africa also posed major challenges to Abiy’s leadership. But Ethiopia’s former arch-rival, Eritrea, is no longer a regional adversary.

In addition, Abiy played a major role in the Sudanese transition from chaos to some political promise. And the fact that he changed the loud silence between Somaliland and Somalia into potentially history-making meetings also deserves recognition.

But, looking back over this period, Abiy’s major achievement could be viewed as the dismantling of the 28-year-old Ethiopian People’s Revolutionary Democratic Front and the birth of a nationally unified political organisation, the Prosperity Party. This is not without its challenges too, however.

These developments have reinvigorated opposition groups afresh. In particular, the Tigray People’s Liberation Front, a regional political organisation that had major dominance over the old revolutionary front, has now emerged as a major political foe to Abiy’s Prosperity Party.

This poses a menace to Ethiopia’s path to reform. As a result, Ethiopia’s road to democracy and national elections, which were due to be held in August, is now facing two challenges: a global pandemic, and deteriorating relations between the Tigray regional state and the Prosperity Party, which is in charge of the federal government, and the remaining eight regions and two city administrations.

In its fight against the COVID-19 pandemic, Ethiopia has so far done a promising job. But cases continue to grow – slowly but alarmingly.

Abiy cited the pandemic as a reason to postpone the national elections. The current administration’s five-year tenure was set to expire come September 30, 2020. Debates on the legitimacy of the government after that date have dominated national discussions.

The government proposed a number of options. One was to dissolve parliament and declare a state of emergency. Another was to request a special constitutional interpretation of the challenge. Yet another was to extend the tenure of current incumbents.

The opposition was consulted and the issues were discussed in parliament. The decision that was finally taken was to ask for a judicial review process to provide a constitutional interpretation. These are done through the Council of Constitutional Inquiry, which then submits its recommendations to the House of the Federation for discussions and a decision.

The House of the Federation is the upper house of Ethiopia’s bicameral legislative branch. Its legislative authority is limited to powers on budgetary allocations, powers to interpret the constitution, and to safeguard the federal constitutional framework.

Based on House’s decision, the chamber postponed the national election.

The decision was not received well by the Tigray People’s Liberation Front. The regional parliament in Tigray has since defied the federal government’s decision, and announced it will hold its own elections.

This decision has wide-ranging implications. By holding an election without the supervision of the National Electoral Board, the Tigray People’s Liberation Front is undermining Ethiopia’s federal constitutional system.

Going it alone is a reflection of the front’s loss of power since the demise of the Ethiopian People’s Revolutionary Democratic Front coalition. This has weakened its resolve to maintain Ethiopia’s constitutional system.

The decision poses a threat to Ethiopia’s promising democracy. It has ignited an unprecedented level of tension between the Tigray region and the federal government. If this situation deteriorates further, the country’s fledgling democracy could regress.

So far, Abiy’s administration has ignored the threat from the Tigrayan People’s Liberation Front. This could lead to undesirable repercussions.

The federal government’s reluctance to address the crisis in Tigray might lead to renewed violence. This could in turn harm government’s response to the public health crisis caused by the COVID-19 pandemic.

Finally, unless addressed, the deteriorating relations between the federal government and the Tigray region could further unravel Ethiopia’s dangerously designed federal system that in any case, is in need of major revision.

For democracy to take root in Ethiopia, the Tigrayan People’s Liberation Front’s defiance to the country’s constitutional order must resolved.