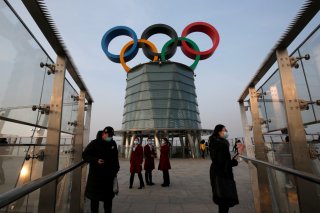 With one year to go before the 2022 Beijing Winter Olympics, there has been talk of boycotting the Games to protest China’s persecution of its Uyghur population — and for the continued detention of two Canadians.

The act of boycotting the Olympics is not as simple as it appears.

Governments don’t send athletes to the Olympics. National Olympic Committees send athletes — and they are supposed to operate independently from their country’s government.

The government could try moral suasion or it could simply pull funding to coerce the Canadian Olympic Committee to go along. But pulling funding from Olympic athletes, who are already arguably underfunded, may not be a popular decision.

Read more: How the rescheduled Tokyo Olympics could heal a post-coronavirus world

Even if the Canadian Olympic Committee went along with a boycott, it is unlikely to be effective.

The 1980 boycott was in response to the Soviet Union’s invasion of Afghanistan, but the Soviets remained in Afghanistan until 1989. The 1984 Soviet-led boycott was a response to the 1980 boycott. The 1984 Games, the first to turn a massive profit, saw American athletes winning a record number of medals because of the absence of Soviet and other Communist bloc athletes.

China wants to become a winter sports power. If the Games were boycotted by Canada and other countries that are traditionally strong winter sports performers, it would open the way for more Chinese athletes to win medals.

More medals won by Chinese athletes would benefit the government of China, rather than punish it for its actions against the Uyghur population or the two imprisoned Canadians.

The focus of the debate over human rights and the Olympics needs to be on the International Olympic Committee. The IOC, which holds the rights to the Games, could put pressure on China. But that’s unlikely.

First, there is no provision in the Host City Contract between the International Olympic Committee and the city of Beijing that would enable the IOC to remove the Games based on human rights issues.

Additionally, the IOC would not want to find a new, last-minute host for the 2022 Winter Games after already delaying the 2020 Summer Olympics in Tokyo by a year due to COVID-19. The IOC is committed to the Games going ahead as planned, seen in the refuting of a recent report suggesting that the Tokyo Games will be cancelled.

Although one might look to the International Ice Hockey Federation’s recent removal of the 2021 World Championships from Belarus as an example for the IOC to follow, it’s a slightly different situation. Formally, the federation pulled hosting rights to protect the safety of players and officials. Informally, it pulled hosting rights because a major sponsor threatened to withdraw funding. Neither of these appear to be the case for Beijing 2022.

Instead, it’s probably more helpful to use participation at the Beijing Games as a way to raise awareness of human rights issues and a form of sport diplomacy.

We have seen this play out with Qatar’s labour law reforms following intense scrutiny as it prepares to host the 2022 FIFA World Cup. Professional sports leagues have also provided an avenue for athletes to raise awareness about Black Lives Matter, an example of positive engagement.

The hurdle to this approach is the Olympic Charter’s Rule 50.2 that states:

“No kind of demonstration or political, religious or racial propaganda is permitted in any Olympic sites, venues or other areas.”

This rule has been criticized and the International Olympic Committee’s Athlete’s Commission is putting forward recommendations to reconsider the rule, including input from Canadian athletes.

This is not to say that raising awareness, demonstrations and protests by athletes will solve the problems. But history shows us that athlete protests can have a powerful effect.

What could affect more change? Having more athletes with the bravery of Tommie Smith, John Carlos and Peter Norman — who used the medal podium at the 1968 Mexico Olympics to protest anti-Black racism — or Canadian athletes staying home next year?