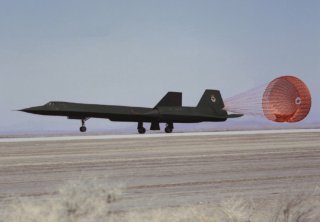 Here's What You Need to Remember: Weaver was also aided by the SR-71's parachute system, which deployed a small-diameter parachute immediately after ejection and seat separation to help reduce the tumbling motions and physical injury that could come from centrifugal forces during such a bailout procedure.

In 1963, author Walter Tevis wrote the novel (later adapted into a film starring pop icon David Bowie) The Man Who Fell to Earth. It told the story of an extraterrestrial whose spaceship crash-landed in New Mexico. In less than three later years, on January 25, 1966, a very similar event actually occurred over the same region.

It didn't involve an alien, however.

Rather Lockheed test pilot Bill Weaver became the man who quite literally fell to earth from an altitude of 78,800 feet. It occurred when he was torn from the seat of an SR-71 "Blackbird," which was flying at speeds far in excess of 2,400 mph, following an engine malfunction. Along with Lockheed flight test specialist Jim Zwayer, Weaver had been conducting a test flight to investigate procedures designed to reduce trim drag and improve high Mach cruise performance.

According to TheAviationist, the test flight may have located the center of gravity (CG) further aft than normal, which reduced the aircraft's longitudinal stability. After the engine failure, the aircraft began to pitch and break up.

The very fact that Weaver survived when his aircraft essentially disintegrated around him at more than three times the speed of sound is notable in itself. But he then blacked out and only regained consciousness to see that he was falling. At first, he thought he was dead, but then realized he had miraculously been separated from the aircraft.

He then managed against all odds to open his iced-up face plate on his helmet and was treated to a view few have ever seen outside of an aircraft. His parachute had deployed automatically and he slowly descended to the desert largely unscathed. Weaver attributed his survival to a miracle but also to the fact that his pressured suit – which provided physical protection from the intense buffeting and G-forces – essentially acted as a tiny escape capsule.

Weaver was also aided by the SR-71's parachute system, which deployed a small-diameter parachute immediately after ejection and seat separation to help reduce the tumbling motions and physical injury that could come from centrifugal forces during such a bailout procedure.

Tragically, while the G-forces from the aircraft's breakup also ripped away Zwayer, the flight test specialist didn't survive the accident. He had suffered a broken neck during the aircraft's disintegration and was likely killed instantly.

Weaver's name may not be as immediately recognizable as Chuck Yeager, John Glenn, or Alan Shepard but he certainly was among those who proved he had "The Right Stuff." As a test pilot for Lockheed, he tested all models of the Mach-2 F-104 Starfighter, all of the Mach-3+ Blackbirds including the A-12, YF-12, and SR-71. He was later assigned to Lockheed's L-1011 project as an engineering pilot and became the defense contractor's chief pilot. He retired as division manager of commercial flying operations.