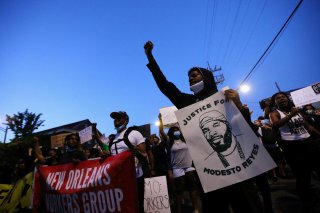 The past few weeks have seen broad‐​based community outrage from extremely disturbing incidents involving current or former police officers in the killing of 44‐​year‐​old George Floyd in Minneapolis, 26‐​year‐​old Breonna Taylor in Louisville, and 25‐​year‐​old Ahmaud Arbery near Brunswick, Georgia. In all cases, the victims were African‐​American and the events have spotlighted the role of racism in policing.

In the immediate aftermath—which exploded during the week of May 25th—there were both peaceful and violent protests, destruction of private and public property, and additional injury in Minneapolis, Louisville, Atlanta, and far beyond. There is no question that the short‐​run costs to each city and its residents will be enormous.

Poor underlying race relations between the police and community has long‐​term costs, too, an issue that I explored with my colleague Tim Harris in a study published in Journal of Housing Economics in 2018. In the study, we explored whether poor underlying race relations in an area might create a chilling effect on homeownership for minorities. We focused on home ownership—an easily measured outcome in many data sets—because it is related to the decision to “plant one’s roots” and invest in a community. It has been argued that home ownership is associated with both private benefits (such as wealth accumulation and better child outcomes) as well as community benefits (such as investment in social capital). Given the illiquidity of homeownership, it can be thought of as a longer‐​term investment for many people.

From 2012 onward, there were a series of high‐​profile events in the U.S. related to police brutality which highlighted racial tension. Using Google Trends, we characterized a locality’s underlying racial climate based on search interest in these charged events. We used data from the American Community Survey prior to any of these flare‐​ups and showed that the ownership decision for black people is responsive to the underlying racial climate; African‐​American homeownership in localities with the most charged racial climates was 5.6 percentage points lower than in the least charged racial climates.

Our findings, insofar as our measure captures problems with the criminal justice system, suggest that some recent proposals with bipartisan support to reform policing and sentencing may have larger social benefits beyond those directly aggrieved. Reforms in police tactics—such as additional training, body cameras, and the use of outside agencies to investigate misconduct—have broad‐​based support. Improving policies has the potential to improve race relations and consequently increase investment in communities through homeownership.

This article by Aaron Yelowitz first appeared in CATO on June 1, 2020.