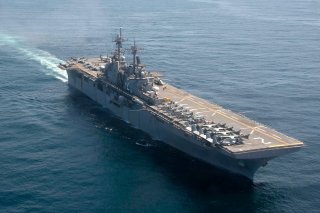 Here's What You Need to Remember: The advent of these kinds of tactical possibilities is informing a multi-year developing Navy strategy to operate large-deck ships such as amphibious assaults ships and carriers to function as “motherships” operating large fleets of unmanned systems.

It appears to be a major development: The U.S. Navy is seeking a 500 ship Navy in what represents a massive and ambitious expansion to out-match fast-growing rival forces, according to a breaking report from Defense News.

Citing documents obtained by the paper, the Defense News report states that a Secretary of Defense-led Future Force Naval Study will recommend a fleet size as large as 530 hulls, consisting of both manned and unmanned vessels.

Additional details, according to the Defense News report, say the Pentagon may reduce the number of big-deck ships and increase the number of smaller, faster, more agile ships intended to operate in tandem with drone boats.

This prospect, should it come to fruition, would be an absolutely massive step as it constitutes a large proposed leap beyond the existing 355-ship Navy plan.

There are many reasons why this may indeed move forward, given the international threat circumstance, emerging technologies and the Navy’s Distributed Maritime Operations strategy.

First and foremost, it is now well known that the Chinese Navy has already surpassed America in terms of sheer numbers and also made progress with a wide sphere of advanced technical breakthroughs.

China’s pace of rapid shipbuilding has alarmed the Pentagon, since Beijing has been moving very quickly to add new amphibious assault ships, carriers, stealthy destroyers and ballistic missile submarines. Many of these ships are also known to incorporate advanced weapons systems such as new nuclear-armed ballistic missiles capable of hitting targets out to 4,000 miles. China is already operating its second indigenously-built carrier and advancing ambitious plans for a third while also building a new fleet of semi-stealthy, heavily armed destroyers.

Also, of equal or even greater significance, the new ship numbers align with the Navy’s plan to greatly increase the number of unmanned systems and manned-unmanned teaming across the fleet. The plan hinges upon the service’s Distributed Maritime Operations strategy aimed at leveraging advances in autonomy, AI and networking to enable more dispersed, survivable and networked operations. Less condense ships also naturally present less vulnerable targets for enemies and offer advantages in wartime.

Fast-developing, and quite promising, new technologies in the areas of autonomy, cross-domain networking and AI are already enabling fleets of coordinated drone boats to share information, conduct coordinated operations and massively decrease sensor-to-shooter time for ship commanders. The Navy’s Ghost Fleet project, for example, is already capable of demonstrating advanced coordination among autonomy and AI-enabled unmanned systems capable of blanketing areas with surveillance, conducting countermine and anti-submarine missions and even firing weapons when directed by humans.

The advent of these kinds of tactical possibilities is informing a multi-year developing Navy strategy to operate large-deck ships such as amphibious assaults ships and carriers to function as “motherships” operating large fleets of unmanned systems. Such a prospect is especially significant for amphibious operations, which could increasingly conduct the initial phases of ship-to-shore attacks with sailors remaining at safer standoff ranges.

Perhaps an early advancing fleet of surveillance, countermine and attack drone boats to launch the first wave of a massive amphibious attack, opening the door for the safer landing of Marines on enemy shores. The idea of “motherships” operating large fleets of drone boats was discussed several years ago at the Surface Navy Association symposium by Maj. Gen. David Coffman, Director of the Navy’s Expeditionary Warfare division. At the time, Coffman said the “bigs” were important, meaning big-deck amphibious assault ships would not lose their strategic and tactical significance. Rather, these large ships would expand their command and control leadership potential to launch aircraft, coordinate drone boat operations and provide crucial support for amphibious attacks and maritime combat.

Kris Osborn is defense editor for the National Interest. Osborn previously served at the Pentagon as a Highly Qualified Expert with the Office of the Assistant Secretary of the Army—Acquisition, Logistics & Technology. Osborn has also worked as an anchor and on-air military specialist at national TV networks. He has appeared as a guest military expert on Fox News, MSNBC, The Military Channel, and The History Channel. He also has a Master's Degree in Comparative Literature from Columbia University. This article first appeared last year and is being republished due to reader interest.