Oops: An F-15C Eagle Dumped Millions of Dollars of Missiles (Right Into the Ocean) 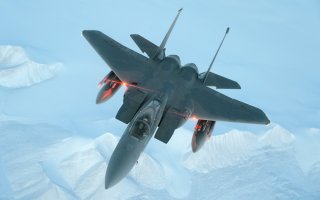 Key Point: The mishap will likely cost the Pentagon $4.5 million — at least.

An Oregon Air National Guard F-15C Eagle that made an emergency landing ditched its entire arsenal of live air-to-air missiles before touching down at Portland International Airport, The War Zone reports back in 2019.

The aircraft, assigned to the 142nd Fighter Wing out of Portland Air National Guard Base, was conducting an alert training mission on the morning Feb. 21 when it experienced a malfunction "centered around its landing gear," according to CBS News affiliate KOIN.

The War Zone, citing sources, reports that F-15 diverted into a nearby military operating area and fired off its missile load into the Pacific Ocean before making its arrested landing at Portland International Airport.

That the F-15 fired its missile rather than simply dropping them is itself a rare occurrence, per the War Zone, but ditching the missiles was an expensive choice: the F-15's standard alert loudout of four AIM-120C AMRAAMs and a pair of AIM-9X Sidewinders likely cost the Pentagon $4.5 million — at least.

The F-15 pilot was not injured in the incident, KOIN reports, and the Oregon Air National Guard has launched an investigation into the cause of the landing gear issue.

Read the whole report at The War Zone here.

This article first appeared last year and is reprinted here due to reader interest.