Operation Aphrodite Was an Allied Blunder in WWII 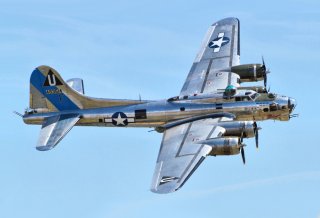 Here's What You Need to Remember: Operation Aphrodite was an unmitigated failure. The B-17 flying bombs were not as effective as the British-designed bunker-buster bombs that ended up taking out the targets earmarked for B-17s. Still, they represent an interesting early attempt at both precision-guided munitions and drones.

Everything was pulled out—seats, ammunition, and bomb storage racks, armor plating, machine guns, everything. This saved an estimated six tons of weight that could be filled with more explosives. The explosive of choice was the British-made Torpex explosive, 50% more powerful than TNT. Torpex is a mixture of TNT, powdered aluminum, and RDX, an early plastic explosive. To fly the huge bombs, remote control equipment was added, and a pair of television cameras were strapped to the cockpit to provide the ground pilot with visual aids while flying.