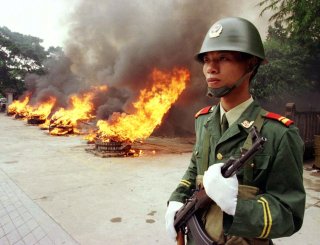 Key point: London instigated a war of aggression against China in order to force an unequal treaty on China. London started a trend after other major imperial powers saw their success they soon followed suit.

The Qing Dynasty, founded by Manchurian clans in 1644, expanded China’s borders to their farthest reach, conquering Tibet, Taiwan, and the Uighur Empire. However, the Qing then turned inward and isolationist, refusing to accept Western ambassadors because they were unwilling to proclaim the Qing Dynasty as supreme above their own heads of state.

Foreigners — even on trade ships — were prohibited from entering into Chinese territory.

Starting in the mid-1700s, the British began trading opium grown in India in exchange for silver from Chinese merchants. Opium — an addictive drug that today is refined into heroin — was illegal in England, but was used in Chinese traditional medicine.