Our Approach To ‘Stealth’ Fighters and Bombers Has To Change 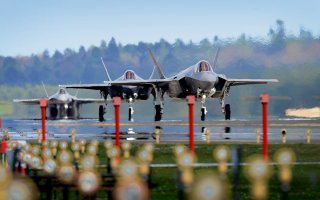 Last March, I explained in Popular Mechanics how platforms like the Valkyrie can help America return to air superiority through volume. Coupling crewed fighters with constellations of UCAVs would allow America to put a World War II-like number of aircraft into a fight, without matching that conflict’s scale of casualties. Attritable drones could intentionally occupy air defenses by allowing themselves to be destroyed, depleting missile magazines, and allowing the crewed aircraft to continue the fight–overwhelming even the most advanced systems through sheer volume, rather than sneakiness alone.

With conspicuous drone targets to engage swarming around air defense systems, America’s stealth jets would be able to more effectively sneak through the chaos. In fact, a similar approach was leveraged in the early days of the Persian Gulf war, with drones not only absorbing anti-air missiles, but also helping to highlight where these missile batteries were.

But it’s not just the combat drones like the Valkyrie that will need to play a role here. In order to keep the heat off of our stealth aircraft, America will need to find ways to draw the enemy’s attention elsewhere.

Throughout the past two decades of warfare, the United States has found itself competing with technologically inferior opponents, which has prompted a very specific approach to information warfare. America hasn’t had to worry about offsetting the technological capabilities of its opponent, so instead, it has focused on maturing our understanding of the battlespace. One unintentional byproduct of that focus has been a reduced emphasis on manipulating enemy awareness.

“Given their overwhelming preponderance of power, U.S. forces sought primarily to clear the fog of war, not to exacerbate it for the enemy,” writes Scott Savitz, a senior engineer at the Rand Corporation, for USNI’s Proceedings.

“This must change, both because potential U.S. adversaries are more capable, and because technological advances are making it easier and cheaper for even lower-end actors to acquire sufficient knowledge of the battlespace to effectively target U.S. forces.“

Now, in Savitz analysis, his focus is not specifically on air platforms, but rather on all of warfare with a technologically capable opponent. Savitz argues that America has adopted the most expensive possible approach to deceiving the enemy: Looking for ways to keep our assets hidden, rather than compromising the enemy’s ability to assess the battlespace. Per Savitz’ line of thinking, it’s cheaper and easier to hide real assets in a sea of fake ones than it is to make those real assets undetectable in the first place.

Savitz doesn’t suggest we do away with our stealth platforms. Instead, he suggests shifting the way we leverage these assets to include a concerted disinformation effort through technology. By fielding drones and drone swarms specifically designed to mimic the behavior and readable signatures of other assets (like tanks, ships, or aircraft), Savitz believes we can confuse the battle space, creating delays in enemy responses. Put simply, Savitz wants to use drones and cyber attacks to manifest a digital “fog of war” that would compound the existing mental stressors associated with combat.

Make the enemy second guess the data in front of them, and you have the advantage.

“Most important, EW and cyberattacks can cast doubt on the accuracy and utility of various systems, while also slowing down an entire ISR network. Parts of the network that operate only intermittently, or behave erratically, are less likely to be trusted.” Savitz explains.

“Credible concerns about EW and cyberattacks degrading information can gnaw on an adversary’s decision-makers as they struggle to interpret a real world full of panoramic illusions. This also can contribute to friction among people and commands as they argue over which systems have been tampered with to what degrees.”

From a strategic standpoint, this approach to creating confusion within the enemy command structure coupled with the sort of advanced stealth capabilities found in forthcoming platforms like the B-21 Raider could be enough to overwhelm even a technologically capable opponent. In the years to come, leveraging stealth platforms without coupling them with attention-grabbing decoys may be seen as outdated as lining up infantry troops across from one another for volley after volley of fire.

In order to defeat a nation with any degree of technological parity with the United States, America will have to change the way it approaches warfare. In the 21st century, deception and disinformation can be just as powerful as their kinetic counterparts, and nowhere is that more apparent than in the realm of stealth.