Out With the Old, In With the New: The Air Force Could Soon Have a Revamped F-35 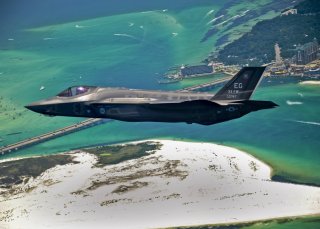 The modernization trajectory for the F-35 stealth fighter jet is such that the newest variants of the jet are engineered with what could be called an almost entirely new kind of weapons and processing capability due to ongoing software upgrades.

These circumstances are aligned with the Pentagon’s long-standing plan to continuously modernize the F-35 such that it can fly into the 2070s or beyond, a process that relies heavily upon ongoing weapons adaptations, integration, mission systems upgrades, and of course continued software upgrades.

The strategy is intended to maximize improvement in those areas of technological innovation emerging at the fastest rate, such as AI-enabled computer processing, data analysis, sensor integration, and weapons upgrades. While there are of course improvements expected in the areas of engine propulsion, various stealth properties, elements of the aircraft's fuselage, and external configuration, the largest margins of difference in near term years will likely be found in the areas of mission systems, data processing and analysis, weapons targeting and guidance, new weapons integration and of course multi-node, multi-domain secure networking.

Considering all these areas, it makes sense that the newest Block IV software-enabled F-35s could almost be described as a new jet when compared with the earliest F-35s. Each new successive software drop has, over the years, brought new software modifications able to vastly expand the arsenal and weapons envelope for the F-35. The F-35 modernization program, called C2D2 for Continuous Capability Development and Delivery goes back many years, with new increments emerging successively as technology matures.  Should new threat details become available, for example, software engineers can update the F-35s Mission Data Files, meaning its threat library database that enables pilots to instantly identify specific enemy aircraft.

Software upgrades to the F-35 have also continuously expanded the jet’s weapons capabilities by architecting the technical specifics necessary to fire or drop new weapons. An F-35 armed with the now-emerging Stormbreaker air-dropped bomb, a development made possible through software upgrades, massively changes the attack possibilities for the jet by virtue of adding an ability to find, track, follow and destroy moving enemy targets at ranges up to forty nautical miles in all weather conditions. The Stormbreaker is engineered with a two-way data link connecting the weapon to the cockpit such that it can be redirected in flight as emerging targets or new intelligence arrives quickly.

All of this may be why a report from Military.com quotes a senior Air Force officer saying that the service will likely opt to build new F-35 variants instead of updating some of its oldest variants of the jet. If true, this would make sense given that it may simply be more efficient and intelligent in terms of sustainability and long-term costs to build them with the latest software, computing, and mission systems, as opposed to investing in upgrading the oldest F-35s.