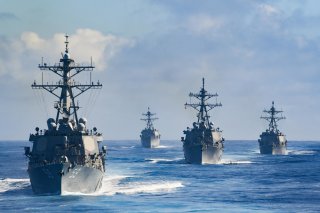 Here's What You Need to Remember: Typically such drug interdiction efforts would entail the use of frigates, but the U.S. Navy is deploying the Arleigh Burke-class destroyers, which are technologically advanced despite their age but are also among the world’s most expensive.

Last week the White House announced that U.S. Navy warships would be sent to the coastal waters off Venezuela in a counter-narcotics role to stop the flow of drugs in the Caribbean. The United States had charged Nicolás Maduro Moros, along with fourteen current and former Venezuelan officials, with narco-terrorism, corruption and drug trafficking last month.

Maduro has been labeled the “Former President of Venezuela” by the U.S. Department of Justice since his presidency was disputed by Juan Gerardo Guaidó Márquez since January of last year following the results of the nation’s general election.

“The Venezuelan regime, once led by Nicolás Maduro Moros, remains plagued by criminality and corruption,” said Attorney General Barr. “For more than 20 years, Maduro and a number of high-ranking colleagues allegedly conspired with the FARC, causing tons of cocaine to enter and devastate American communities.”

This month the U.S. Navy has begun one of the largest U.S. military operations in Latin America since the December 1989 invasion of Panama to remove General Manuel Noriega from power during Operation Just Cause. Noriega was brought to the United States to face drug charges.

Under this new—as yet unnamed—deployment the Navy is sending warships including three destroyers and a detachment of P-8 Poseidon surveillance aircraft, along with ground Special Forces. This will nearly double the U.S. counter-narcotics capacity in the Western Hemisphere, and will entail forces operating in both the Caribbean as well as in the eastern Pacific. Defense Secretary Mark Esper, who spoke to reporters following the daily briefing by President Donald Trump on April 2, said that the mission will be supported by twenty-two partner nations.

President Trump had warned that cartels, criminals and terrorist groups might exploit the ongoing COVID-19 pandemic.

“We must not let that happen,” the President said during his briefing.

Typically such drug interdiction efforts would entail the use of frigates, but the U.S. Navy is deploying the Arleigh Burke-class destroyers, which are technologically advanced despite their age but are also among the world’s most expensive. These ships are armed with 56 Raytheon Tomahawk cruise missiles, with a combination of land-attack (TLAM) missiles with a Tercom-aided navigation system, and anti-ship missiles with inertial guidance. That could be considered serious “overkill” for combating drug smugglers in the Caribbean and Pacific, but the destroyers would most certainly send a loud and clear message to Maduro as well as to the cartels.

However, as the National Review reported, there is another reason: “The answer is that the Navy doesn’t have the low-end ships to match with those missions.” That refers to the frigates and corvettes that typically perform the day-day escort, surveillance and interdiction missions.

For instance, in January, the Navy sent the Freedom-variant littoral combat ship USS Detroit (LCS 7) on a freedom of navigation operation off the coast of Venezuela in a show of pressure against Maduro.