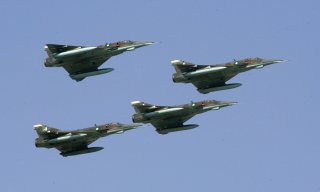 Here's What You Need to Remember: In 2018 photos circulated apparently depicting a JF-17 firing a CM-400AKG in a test that perhaps took place a few years earlier.

The Pakistani air force is acquiring more than a hundred JF-17s from China in order to complement older F-16s, Mirages and J-7s.

The CM-400AKG, a product of the Aviation Industry Corporation of China, is an unusual weapon. Unlike many other anti-ship missiles, it follows a high ballistic flight path.

The supersonic standoff missile first appeared in public at an air show in Zhuhai, China in 2012. The missile appeared in a display with the JF-17, a highly-evolved derivative of the MiG-21 that China has sold to Pakistan, Myanmar and Nigeria at a cost of around $30 million per plane.

Six years later, the Pakistani defense ministry revealed that it purchased 60 CM-400AKGs at a total cost of $100 million. The acquisition transformed the country’s JF-17s into potent ship-killers.

In 2018 photos circulated apparently depicting a JF-17 firing a CM-400AKG in a test that perhaps took place a few years earlier.

The CM-400AKG reportedly weighs around 2,000 pounds and carries either a 300-pound fragmentation warhead or a 400-pound penetrating warhead. It reportedly can fly as far as 150 miles.

The missile boasts an internal navigation system that guides it near its target, at which point a combination infrared- and radar-seeker takes over. Sources claim the weapon’s circular-error probability is as small as 15 feet, meaning it has a 50-50 chance of striking within 15 feet of its aimpoint.

The CM-400AKG reportedly can maneuver in its final seconds of flight, helping it to dodge enemy defenses. It tops out at five times the speed of sound, sources claim.

Some observers have pointed to the CM-400AKG’s high speed in order to draw comparisons with the Indian armed forces’ own Brahmos cruise missile. Itself a derivative of the Soviet Oniks cruise missile, the air-, sea-, undersea- and land-launched Brahmos can fly as fast as Mach three and strike targets as far away as 370 miles.

The CM-400AKG’s size, range and accuracy are consistent with the capabilities of other anti-ship weapons. What’s odd is the weapon’s flight profile.

Most anti-ship missiles launch from low altitude in order to avoid detection. The CM-400AKG, by contrast, is designed to launch from high altitude.

The weapon’s apparent origin as a development of the SY-400 short-range ballistic missile could explain this odd profile. The CM-400AKG like other high-flying ballistic missiles consumes solid fuel and does not require an air inlet. Lower-flying weapons often combine liquid fuel and an air-breathing motor.

David Axe was the defense editor of The National Interest. He is the author of the graphic novels War Fix, War Is Boring and Machete Squad.