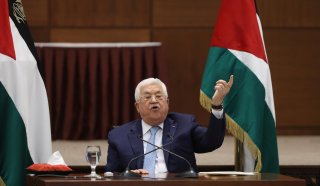 Palestinian President Mahmoud Abbas is in the 15th year of his four-year term. Talks about replacing the aging president for life, who turns 85 this November, are escalating behind the scenes. Age notwithstanding, Abbas has used his long tenure to exert a vice-like grip on Palestinian institutions, disbanding the Palestinian Legislative Council and quashing dissent. As a result, his eventual demise presents an existential threat to the Palestinian Authority.

Should Abbas die tomorrow, there is no formal process through which a successor would be chosen. Without an appointed successor, a power vacuum looks almost certain, exacerbating intra-Palestinian political divisions, potentially leading to violence and yet more instability for the much beleaguered Palestinian people. And this couldn’t come at a worse time, as they are in dire need of responsible leadership in the face of the twin crises of COVID-19 and a looming Israeli annexation. On both fronts, Abbas is failing.

This week, Abbas rejected 16 tons of medical equipment to combat COVID-19. The reason? It passed through Israel. Meanwhile, as momentum for annexing the West Bank accelerates within Israel, he has failed to organize a coherent response. In a supposedly dramatic gesture last week, Abbas dismantled the Palestinian Authority’s security and economic cooperation agreements with Israel. Yet he has disbanded such agreements no less than 12 times before, and Israel’s policy and decision-makers — along with the rest of the world — no longer take such actions seriously.

In a perfect world, Abbas would set a date to step down and groom potential successors.  But he has never before indicated a willingness to transfer power. In a slightly less perfect world, the many donors that sustain both the Palestinian Authority and the Palestinian people (we’re looking at you, European Union) would begin to leverage their aid to insist that Abbas put in a place a glide path to his resignation and elections. Of course, all of this is complicated by Hamas rule over Gaza and the mixed signaling by the White House about Israeli annexation of certain West Bank settlements. Indeed, there’s really only one certainty for the would-be state of Palestine: The Palestinian people will be the losers.

Allison Schwartz is the communications assistant for AEI’s Foreign and Defense Policy department.

Learn more: We cannot let the pandemic distract from developments in Afghanistan | The coronavirus won’t kill the Islamic Republic | Trump unveils ‘deal of the century’

This article by Allison Schwartz first appeared in AEIdeas on May 28, 2020.