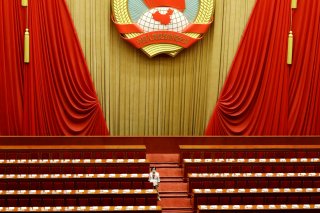 The triple crises of geopolitical power shifts, the Covid-19 pandemic and the economic disasters that flow from it will shape global politics, restructure global supply chains and bring an end to unregulated globalisation. The post-pandemic world is yet to take shape, but it’s likely to be as divided and bifurcated as occurred after World War II.

We are entering a new cold war with eyes wide open, not sleepwalking into it as some would argue. The vast Indo-Pacific region from the western Pacific to the western Indian Ocean is its ground zero.

China’s economy is particularly susceptible to declines in foreign investment, technology controls and export markets. A prolonged economic slowdown caused by the pandemic, war or natural disasters, potentially made worse by the exodus of multinational corporations (aka Chiexit), could even threaten the stability of China’s one-party regime.

After spending so much building its military capabilities and war-fighting doctrines, China may well be tempted to try them out, perhaps on a weaker neighbour. Manufacturing disputes where none exist is an old tactic, and China’s new territorial claims on tiny Bhutan’s eastern border illustrate the point.

While Chinese leader Xi Jinping appears keen to lock in China’s geostrategic gains, the ‘Quad’ democracies (the United States, Japan, India and Australia) and other like-minded nations want the Indo-Pacific to remain multipolar with Chinese power balanced by a continued US presence and by the power of other Asian states.

China’s vision of a power-and-hierarchy-based order clashes with the law-and-order-based vision of a free and open Indo-Pacific. Western, Japanese and other multinational corporations will aim to reduce their dependence on China. China’s mercantilism, its worldwide quest for resources, markets and bases, and its attempts to carve out a Sinosphere of influence will now face intense opposition from US allies and partners.

The world is transitioning from globalisation to regionalisation of trade. Rival trading and technology blocs will emerge through which governments will try to regulate the flow of goods, services, finance and labour in strategic sectors to safeguard their national interests. As economic issues get mired in domestic politics, trade and technology can become contentious and even explosive issues. Economic polarisation will sharpen political differences.

Tech wars over artificial intelligence, big data, robotics, biotech and 5/6G could result in a bifurcation of the global economy or usher in ‘one world, two systems’. Two separate blocs—driven primarily by national security concerns and economic or commercial interests—could create a fragmented world of conflicting visions and rules in the political, economic, technological, maritime, space and cyber domains.

The forces of geopolitics, ideology, nationalism and economic and technological competition will strain relations among nations. Countries big and small will be forced to choose sides. Fence-sitting will be difficult. To avoid coercion or collateral damage, most countries would prefer to trade with economies with which their interests and values converge.

Historically, small states are the first to feel the impact of major shifts in global geopolitics. Small and middle powers will find their room for manoeuvre severely constricted and the troubled waters extremely difficult to navigate.

The contest for the allegiance of small island states, from Samoa and Solomon Islands in the Pacific to Sri Lanka and the Seychelles in the Indian Ocean, is part of a bigger Indo-Pacific power game. The intense jockeying for influence and forward presence among major maritime powers seeking control of ports, logistical facilities and other pieces of critical infrastructure along the vital sea lanes will create new friction points. With the world’s largest navy, China would want to become a resident power in the Indian Ocean and beyond, just as Britain, France and the US became resident powers in the 19th and 20th centuries.

As partnerships and allegiances among states shift, new strategic balances, new institutions and new norms will emerge. Pressure will grow to reform old institutions such as the United Nations, the World Health Organization and the World Trade Organization, and to form new ones.

The US leads an informal ‘Quad Plus’ group to coordinate responses to the pandemic. It includes India, Japan, Australia, Vietnam, South Korea and New Zealand. The G7 is likely to turn into a D10—a concert of 10 democracies. The BRICS grouping of Brazil, Russia, India, China and South Africa might fall apart and be replaced by a Pakistan–Russia–Iran–China axis.

The world will be very different after the pandemic. The days of ‘Chimerica’, ‘responsible stakeholder’, ‘Chindia’, ‘South–South Cooperation,’ ‘Asian century’, ‘Asia for Asians’, and unregulated globalisation are over. With Cold War 2.0 intensifying, ‘Chindia’ and ‘Chimerica’ on a war footing and decoupling economically, the much-touted Pacific century will not be pacific, or Asian.

It may well turn out to be just another bloody century.

This article first appeared in the Australian Strategic Policy Institute's The Strategist.