Partisan Games: The Confirmation of Judges Is Becoming a Political Weapon 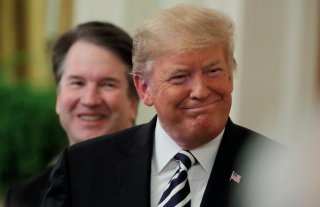 A new report from The Heritage Foundation documents how radically the norms of the judicial confirmation process have changed, especially in the past 20 years.

These norms were based on how America’s Founders designed the process for appointing judges. The Constitution gives the power to make nominations exclusively to the president, but requires the Senate’s “Advice and Consent” for a nominee to be appointed.

This did not mean that the Senate was a co-equal, independent participant in the process, but a check on the president’s power to avoid, as Alexander Hamilton wrote, the appointment of “unfit characters.”

The Senate’s role was expected to be a largely “silent operation,” and opposing the president’s nominees would require “special and strong reasons.”

This design suggests some basic norms for the actual appointment process. The Senate would confirm most presidential nominees with little or no opposition, and do so efficiently without a time-consuming recorded vote.

There would be little systemic or routine partisanship or attempts to use Senate rules in novel ways to obstruct confirmation. That deferential approach is exactly how the confirmation process operated for more than two centuries.

Judges on the most significant federal courts, which Congress creates with authority granted by Article III of the Constitution, do not have defined terms.

During the entire 20th century, senators of one party opposed an average of just 2% of the other party’s judicial nominees.

The Senate must end debate on a nomination before making a final confirmation decision. Traditionally, the majority and minority decided informally how much debate, if any, would be necessary.

Since 1917, however, the Senate also has had a rule providing for a formal process to invoke cloture, or end debate, in case that cooperation proves impossible. The rule requires 60 votes to end debate, allowing a group of senators who lack the votes to defeat a measure outright to prevent a final vote altogether.

A “filibuster” occurs when an attempt to end debate using the cloture process is unsuccessful.

The cloture rule, which originally applied only to legislation, also has applied to nominations since 1949.

But over the next 50 years, while the Senate confirmed more than 2,000 judges, it had to use the cloture process only 12 times. Only one judicial nominee was defeated by a filibuster.

The Senate stuck to these confirmation norms through periods of significant turmoil, and even through periods of disagreement about how the judiciary fits into our overall system of government and how much power judges should have.

President Franklin Roosevelt, for example, rejected the Founders’ design for a judiciary that interprets the Constitution as written, favoring instead judges who change the document’s meaning to expand federal government power.

President Ronald Reagan rejected such a politicized judiciary and worked to reestablish the Founders’ original design.

Norms of the confirmation process, however, remained stable.

The norms that took two centuries to establish have taken only two decades to collapse. During the George W. Bush administration, the percentage of judicial nominees confirmed without opposition fell, and those confirmed by recorded vote more than quadrupled.

Partisan opposition increased by 50% and the Senate was forced to take nearly three times as many cloture votes on judicial nominations as in the previous five decades combined.

The process actually stabilized during the Obama administration. Although confirmations without opposition declined further, many of President Barack Obama’s nominees were confirmed with only a few negative votes.

The percentage of confirmations by recorded vote increased, but more than half were unanimous. Republican senators voted against an average of 9% of Obama nominees and, during the first five years of Obama’s eight years in office, forced the Senate to take just 12 cloture votes.

Even though the confirmation process had settled down, Senate Democrats in November 2013 changed the interpretation of the cloture rule to make ending debate easier on all but Supreme Court nominations.

This effectively abolished filibusters of nominations, eliminating the very tactic under a Democratic president that Democrats had begun using 10 years earlier under a Republican president.

Then came President Donald Trump. Comparing the confirmation process before and since he took office paints a shocking picture.

Confirming nominees without opposition dropped from 94% to 26%, while confirming by recorded vote jumped from 17% to 82%.

Trump’s nominees have received more than 20 times the opposition of pre-Trump nominees. Partisan opposition has jumped from 2% to 46%, and the percentage of nominees confirmed only after a cloture vote skyrocketed from 3% to 77%.

This Heritage Foundation report details all of these developments and shows that the radical transformation of the judicial confirmation process cannot be explained by ordinary factors such as the nominees’ qualifications.

This is supported by the fact that Trump’s nominees receive ratings from the American Bar Association—which has a demonstrable anti-Republican bias—comparable to nominees of his predecessors.

Instead, the confirmation process has been detached from its designed purpose of evaluating nominees and weaponized to fight the president who chose those nominees.

This article by Thomas Jipping first appeared in The Daily Signal on June 11, 2020.