To Patrol The Persian Gulf, Iran Has Invested In Fleets Of Fighting Speedboats 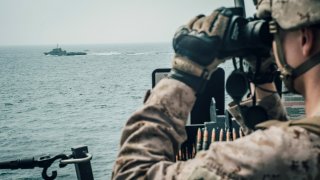 Here's What You Need To Remember: In service of the missile-attack gambit, the Bavar-2s (the name means “Belief” or “Confidence”) would skim ahead, acquire targeting data on enemy warships, and relay that information to speedy missile boats. Zulfikar-class fast patrol boats could then quickly dart into maximum firing range while traveling at seventy knots to launch their two Nasr-1 cruise missiles (domestic versions of the Chinese C-704), then run away to avoid retaliation.

Sébastien Roblin holds a Master’s Degree in Conflict Resolution from Georgetown University and served as a university instructor for the Peace Corps in China. He has also worked in education, editing, and refugee resettlement in France and the United States. He currently writes on security and military history for War Is Boring. This first appeared in November 2017.