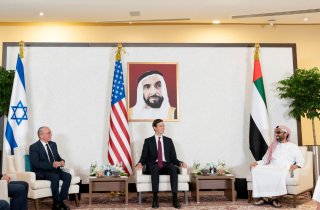 The agreement between the United Arab Emirates and Israel, although touted as a ‘peace’ deal, is no such thing. For one thing, the UAE and Israel were never at war. The UAE agreed to ‘full normalisation of relations’ with Israel in exchange for its ‘suspending’ annexation of parts of the occupied West Bank awarded to it by the US President Donald Trump’s Middle East plan. The agreement can be seen in part as an attempt to bolster Trump’s chances of re-election in November because he can sell it to the American public as his major foreign policy achievement.

For those familiar with the development of Israel–UAE relations over the past few years, the agreement is more like a coming-out party than a radical departure from the status quo. It may have symbolic importance but doesn’t add much to the substance of relations between the two countries. After all, Israel–UAE collaboration, especially in the security and technology sectors, has been an open secret for the past several years.

The UAE’s action opens the door for the establishment of formal diplomatic relations between Israel and other Gulf Cooperation Council states. Oman and Bahrain, which have openly welcomed the deal, are likely to lead the way. Saudi Arabia may not follow the UAE’s lead immediately for fear that it could erode its credibility as the keeper of the two holiest Muslim shrines, but it is clearly headed in that direction. Given the UAE’s very close relations with Saudi Arabia, as witnessed in their joint military operations in Yemen and in support of Syrian rebels, it’s clear the deal would not have been done without Riyadh’s blessings.

The fundamental shift in Saudi policy on the Israeli–Palestinian conflict has been evident since the coming to power of Crown Prince Mohammed bin Salman. In April 2019 he endorsed the pro-Israel Trump peace plan, declaring, ‘The Palestinians need to accept [Trump’s] proposal or stop complaining.’ This was a radical departure from the Arab League peace initiative of 2002 authored by Saudi Arabia. That plan had declared that the Arab countries were willing to normalise relations with Israel if it agreed to withdraw to its 1967 borders.

Both Israel and the UAE perceive themselves as principal beneficiaries of the deal. For Israel, this is the first agreement with an Arab state that doesn’t explicitly link it to a resolution of the Israel–Palestine conflict. Both the Israel–Egypt and Israel–Jordan agreements had made this linkage, although in practice little pressure was exercised on Israel to end its occupation of Palestinian territories. The Israel–UAE deal only mentions that as a quid pro quo for the UAE’s agreement to normalise relations with Israel.

However, immediately after the agreement was announced, Israeli Prime Minister Benjamin Netanyahu made it clear that Israel’s suspension of annexation of the West Bank was a temporary measure. In any case, the US has insisted that the timing of the annexation must be subject to Washington’s concurrence, which it is withholding for the moment. Moreover, Democratic presidential candidate Joe Biden’s open opposition to the annexation plan has acted as a further deterrent for Netanyahu, especially since Biden has a good chance of winning the November election.

The temporary suspension of Israel’s annexation plan is a concession not to the UAE but one that has been forced on him temporarily by American policy and the contingencies of the American election. But, as Netanyahu’s pronouncements indicate, in the long run Israel is likely to have its cake and eat it too.

Abu Dhabi sees its open embrace of Israel as an insurance policy against presumed Iranian designs for dominance of the region. The UAE and most other members of the GCC now perceive Israel as their ‘protector’ against Iran because they are unsure if the United States, in its current retrenchment mode, will come to their aid in case of a showdown with Tehran. America’s reluctance to support Saudi Arabia in any material way when missile and drone attacks were launched on its oil facilities by Iranian-supported forces in September 2019 was a clear indication of Washington’s unwillingness to be drawn into conflict with Iran for the sake of its Gulf allies.

An additional reason that has prompted the UAE to court Israel is the deteriorating relations between the UAE and Turkey. Ankara has been Qatar’s primary supporter and supplier of essential goods, which has helped it defy the embargo the GCC imposed on it in 2017 for its close relations with Iran. Turkey also has a military base in Qatar and sent additional troops to the country when it was faced with the threat of an imminent showdown with Saudi Arabia and the UAE in 2017. Turkey and the UAE are also on opposite sides in the civil war raging in Libya. The deterioration in Israel’s relations with Turkey, which has ambitions of emerging as the leading Muslim state in the Middle East and spearheading the fight for the liberation of Jerusalem, provides further convergence of interests between the UAE/GCC and Israel, and the normalisation agreement is a product of that convergence as well.

Many analysts have argued that the Palestinians are the primary losers in this game. However, they have nothing more to lose as the continued Israeli occupation of the West Bank amounts to de facto annexation. Most Palestinians have known for some time that none of the Arab states are interested in exerting themselves in changing the situation in the West Bank. This agreement should convince the remaining sceptics that the only option open to the Palestinians is to work towards the goal of establishing a single democratic state in the land between the Jordan River and the Mediterranean Sea that guarantees equal rights for all its inhabitants.