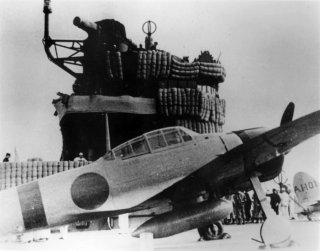 During the early hours of December 7, 1941, five midget submarinesof the Imperial Japanese Navy waited to enter Pearl Harbor, the anchorage of the U.S. Pacific Fleet. Their mission was to complement the attack of naval aircraft in dealing a crippling blow to the American naval presence in the Pacific. This ambitious plan failed. Only one craft survived, HA-19, along with one member of its two-man crew, Ensign Kazuo Sakamaki, who became “Prisoner No. 1” of the United States in World War II.

Sakamaki grew up in a tradition-bound Japanese culture that showed deep reverence for family, teachers, and Emperor Hirohito. He later explained, “We were taught, and we came to believe, that the most important thing for us was to die manfully on the battlefield—as the petals of the cherry blossoms fall to the ground—and that in war there is only victory and no retreat.” So, he applied for admission to the Japanese Naval Academy at Etajima and became one of 300 chosen from 6,000 applicants. After graduation, he spent a year at sea, then was promoted to ensign and ordered in April 1941 to report to the Chiyoda, a converted seaplane tender, at the Kure naval shipyard.

Sakamaki had been chosen to take part in the development of a secret weapon, the midget submarine, and would join an elite group called the Special Attack Naval Unit. Cadets received training on the island of Ohurazaki, along with a theoretical education at the Torpedo Experimental Division of the Kure Navy Yard. Classes were also held on the tug Kure Maru and seaplane tenders Chiyoda and Nisshin. This intense training program, which was observed and monitored, caused some cadets to drop out and others to commit suicide. Only the finest survived.

Sakamaki and his fellow crewman, Warrant Officer Kiyoshi Inagaki, learned the ins and outs of their special craft. Each sub held two crewmen because of cramped space. The only entrance was through a 16-inch hatch in the conning tower. The Imperial Japanese Navy called these minisubs Ko-Hyoteki, but those attached to units used the mother sub’s name, such as I-24’s midget. Paul J. Kemp says in Midget Submarines that these were “perhaps the most advanced midget submarines in service with any navy during the Second World War.”

Built in 1938, these cigar-shaped minisubs stretched nearly 80 feet with batteries arranged along each side. They could travel at a speed of 23 knots surfaced and 19 knots submerged, but battery charges lasted only 55 minutes. None of the craft carried generators, so they required recharging by a tender or mother submarine.  The torpedo room housed two 18-inch torpedoes, each with around 1,000 pounds of explosives in the warhead. The Japan Optical Manufacturing Company perfected a specialized 10-foot-long miniaturized periscope in secrecy.

In fact, great secrecy shrouded the entire project. The Japanese eventually produced over 400 vessels of four types in a special factory near Kure. Of these, around 60 Type A submarines, the type commanded by Sakamaki, were built. Only key commanders knew details. Dispatches called the craft Special Submarine Boats Koryu (dragon with scales) and other creative names to avoid revealing the true nature of the machines.

When the subs first arrived, one seaman recalled, “After we secured, a barge came alongside each submarine. The barges were carrying strange objects heavily screened by black cloth and guarded by armed sailors and police. The objects were hoisted onto the casing and secured in the cradles—still wreathed in their coverings. We, the ship’s company, were not informed what the objects were. It was only when we proceeded to sea for trials in the Sea of Aki that we learned what we were carrying.  The morale on the submarine was incredible.”

In mid-October 1941, maneuvers around islands in the Inland Sea shifted from mid-ocean strategies to invading narrow inlets at night. “When Captain Harada told us to pay particular attention to Pearl Harbor and Singapore,” Sakamaki recalled, “we thought that one group would probably be used against Pearl Harbor and another group against Singapore.” After crewmen graduated and received a 10-day leave, Admiral Isoroku Yamamoto, commander of the Imperial Japanese Navy’s Combined Fleet, spoke to them aboard the battleship Nagato and emphasized the importance of their secret mission against Pearl Harbor.

Five submarines, I-16, I-18, I-20, I-22, and I-24, were to carry midget submarines behind their coming towers. Each minisub would travel piggybacked to the large submarine’s pressure hull with steel belts and was to be released while the mother ship was submerged, enabling it to avoid exposure to the enemy. Some officers opposed the daring plan to use midget submarines to attack American ships in the narrow confines of Pearl Harbor. Captain Hanku Sasaki, commander of the First Submarine Division, wondered if the big submarines could handle so much weight. “There was too much hurry, hurry, hurry,” he criticized after the war.

Commander Mitsuo Fuchida, who led the air attack against Pearl Harbor, scoffed at the entire plan. Others thought the midget submarines rolled and pitched too much. Their conning towers were exposed, and they depended on mother ships for equipment and maintenance. Besides, the element of surprise, which was essential to the success of the air attack, might be compromised if the midget submarines were discovered.

Sakamaki’s minisub was strapped to submarine I-24, which was a long-range reconnaissance type, 348 feet long with a 30-foot beam.  Nine thousand horsepower enabled them to reach a surface speed of 22 knots. A telephone line from HA-19’s conning tower connected the two craft, and an attached cylinder between the boats allowed crewmen to stock supplies and make periodic equipment checks en route. On November 18, 1941, Sakamaki wrote home, “I am now leaving. I owe you, my parents, a debt I shall never be able to repay. Whatever may happen to me, it is in the service of our country that I go. Words cannot express my gratitude for the privilege of fighting for the cause of peace and justice.”

The five I-class mother ships and their Special Attack Force minisubs left Kure and headed across the North Pacific to Pearl Harbor on a moonless night. They traveled slowly because of cargo and rough weather, running submerged during the day to avoid detection and surfaced during the evening, maintaining a distance of about 20 miles from each other. Commander Mochitsura Hashimoto, skipper of I-24, remembered many troubles during the ocean trip to Hawaii, including clogged pumps, defective valves, and gear malfunctions.

Once I-24 nearly sank because of a stuck blow-valve, which was freed at the last moment. After surfacing, the crew found a crushed torpedo on Sakamaki’s midget sub and worked all night to replace it with a spare.  Hashimoto later said, “This operation may sound easy enough, but in fact, it was far from simple. The lack of space on the narrow upper deck made transporting something weighing over a ton to the after-end of the boat no mean task, say nothing of having to dispose of the damaged torpedo quietly over the side.”

“We were Members of a Suicide Squadron”

The five midget submarines were to be launched off the coast of Oahu where they were to quietly enter Pearl Harbor, navigate around Ford Island counterclockwise, and strike the U.S. battleships moored in the shallow water of the harbor. The minisubs were initially expected to attack between the first and second waves of the air attack. When the American battleships attempted to get underway and escape to the open sea, they might be crippled and clog the mouth of the harbor. “I was astonished and felt as if suddenly petrified,” Sakamaki remembered of the moment the details of the plan were revealed to him. “The effect was like a sudden magic blow.”

Although the plan called for the midget submariners to rendezvous with their mother subs to be recovered on December 8, 1941, about eight miles west of the island of Lanai, Sakamaki realized that the mission was suicidal. The midget submarines lacked battery power to travel such a distance after the assault.

Sakamaki said, “We were members of a suicide squadron. We did not know how we could ever come back.” Rear Admiral Hisashi Mito, who commanded a division of submarine tenders, also remarked after the war that all minisub crewmen “were prepared for death and not expected to return alive.” The name “Special Naval Attack Unit” was a euphemism for suicide attack in the Japanese language. These submariners predated later kamikaze attack units.

By the night of December 6, the mother ships neared Hawaii, and the flickering lights along Oahu’s Waikiki Beach were visible. Landing lights at Hickam Field on Ford Island blazed. Jazz music floated from radios and bars.  Everything appeared calm. The large subs fanned out within 10 nautical miles of Pearl Harbor’s mouth and waited for the moment to launch their midget submarines.

“On to Pearl Harbor!”

Shortly before the launch, Sakamaki wrote a farewell note to his father, made a will, and cut the traditional fingernail clippings and lock of hair for the family altar. Then, he put on his uniform, a cotton fundishi (breech-cloth), leather jacket, and a white hachimaki headband. He and Inagaki also sprayed themselves with perfume of cherry blossoms, and both were now ready to die honorably according to the Bushido code of conduct for Japanese warriors.