Is the Pentagon Too Dependent On Chinese-Made Supplies? 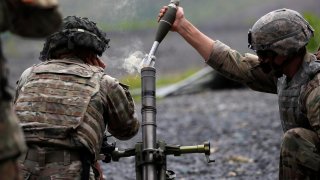 An incredibly disturbing analysis of US Department Defense (DOD) supply chains was recently conducted by the research firm Govini. This analysis — a mere tip of the iceberg, as it only looked at a sample of US defense suppliers — found that DOD’s supply chain is riddled with Chinese suppliers and content. Perhaps most significantly, the vast majority of this infiltration occurred in the last decade during the transformation of China from potential economic partner to strategic rival and global threat.

In Govini’s sample of US firms that contracted directly with DOD, the number of Chinese suppliers within the firms’ supply chain had increased by 420 percent since 2010 to a total of 655 entities. This Chinese penetration of the US defense market occurs across many different industries to include semiconductors, specialty chemicals, software, electronic components, aerospace, pharmaceuticals, and biotechnology.

None of this should be surprising given defense spending and commercial manufacturing trends over the last three decades, but this data should serve as an alarming wake-up call for anyone concerned about the future security of the defense industrial base.

DOD lost its innovation advantage with respect to the commercial sector long ago. This began in 1980 when DOD’s share of US research and development expenditure was overtaken by the private sector. The end of the Cold War displaced any hope of DOD ever catching up with the commercial market as defense R&D budgets continued to fall and private capital rushed to Silicon Valley.

In recognition of these new facts, Congress enacted a series of wide-ranging acquisition reforms in the mid-1990s to make it easier and cheaper for the government to contract for new commercial items and ideas. As a result, commercial technology has flowed ever since into US weapons systems to help DOD maintain its technological edge at an affordable cost.

But unfortunately, what happened in Silicon Valley didn’t always stay in Silicon Valley. The commercial sector globalized and in the last two decades was lured to China by false promises, cheap labor, and subsidized prices while turning a blind eye to the theft of their companies’ intellectual property. Govini’s findings of China embedded in the US defense supply chain is the result of DOD in the last decade missing the significance of its growing dependence on commercial globalization run amok.

It is now imperative for DOD to take steps to reduce and eventually eliminate its Chinese addiction. This will not be easy. What is needed is a thorough triage of the China dependency in order to develop a plan for a real decoupling that relies on a system of trusted suppliers. This should not be some knee-jerk Buy American reaction that will be both unworkable and unaffordable, but a path to cooperation with our closest allies and partners to lessen our dependence on an actor that can no longer be trusted. A secure supply chain can be developed based on both shared interest and values, and it is long past time to start that effort.

This article first appeared in AEIdeas on August 17, 2020.