The Pentagon's Report Cleared Up Absolutely Nothing About UFOs 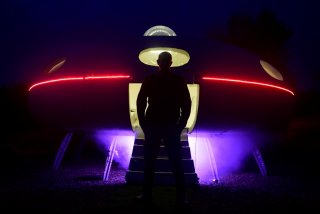 Here's What You Need to Remember: To a certain strand of believer, the Pentagon's conclusions mean that the only possible explanation for the UFOs is extraterrestrial activity—a conclusion that the Pentagon report does not support but does not explicitly rule out.

In December 2020, Congress passed the “Consolidated Appropriations Act, 2021”, a 5,500-page omnibus bill covering a variety of housekeeping issues. The bill is better remembered for approving the second round of $600 stimulus checks, but it also included thousands of other minor requests—one of which, unusually, required the Pentagon to compile a report on unidentified flying objects (UFOs).

The term “UFO” broadly refers to any aerial phenomenon for which there is no explanation. The Pentagon was instructed to provide the report within six months; it was released on June 25, shortly before the deadline (you can read it here). However, the nine-page report does not contain much; the Pentagon has concluded that it has no definitive answers regarding UFOs. Of the 144 “unexplained aerial phenomena” it examined, it was unable to find an explanation for 143 of them and concluded that it could not rule anything out. For those who hoped that the Pentagon could shed some light on the UFO question, the report’s conclusions are most likely disappointing.

Moreover, more than simply a fount for fringe conspiracy theories, “unexplained aerial phenomena,” as the Pentagon describes them, have been described as a national security threat. Senator Mark Warner (D-VA), head of the Senate Foreign Relations Committee, told an Ohio news station that, “If there are objects flying over military installations that could pose a security threat … [it] needs to be declassified and revealed to American public. […] If there’s something out there, let’s seek it out, and it is probably a foreign power.”

However, security experts have cast doubt on the idea that the mysterious aircraft are the work of a foreign government, noting that such aircraft would have required an enormous technological leap within a foreign country’s aerospace agencies, all of which operate with a small fraction of the capital of the U.S. defense budget. It would have also required an enormous failure on the part of U.S. intelligence agencies responsible for monitoring other nations’ aerospace programs.

To a certain strand of believer, these conclusions mean that the only possible explanation for the UFOs is extraterrestrial activity—a conclusion that the Pentagon report does not support but does not explicitly rule out. For those who do not believe in aliens, though, the UFO mystery will simply remain a mystery—and the truth, whatever it is, is still out there.