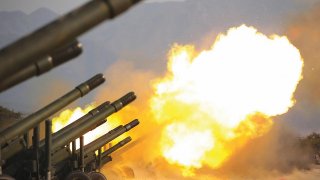 Image: An artillery fire competition between the artillery units under the Korean People's Army Corps 7 and Corps 9 takes place at a training ground in North Korea, March 12, 2020 in this picture supplied by North Korea's Korean Central News Agency (KCNA).