Pod Schooling: How Public Schools Are Getting In the Way Of Education Under Coronavirus 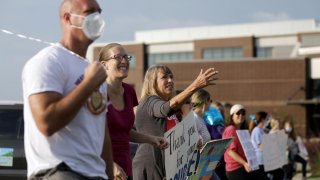 You’ve probably heard about “pods” – small, self‐​contained groups of kids that parents assemble for COVID‐​safe, in‐​person education. They have spurred some public schooling groups to speak out, warning that they may exacerbate inequality. What such groups have not tackled is what could make pods broadly affordable: letting education tax dollars follow children rather than staying in public schools.

In Fairfax County, Virginia, the school district posted a message telling families that “pandemic pods” are legal – quite a concession! – but:

While FCPS doesn’t and can’t control these private tutoring groups, we do have concerns that they may widen the gap in educational access and equity for all students. Many parents cannot afford private instruction. Many working families can’t provide transportation to and from a tutoring pod, even if they could afford to pay for the service.

In Oakland, California – where a battle between the teachers union and district threatens to start the new school year without instruction – a group of elementary school principals recently warned that while “podding is a creative solution to an impossible situation…the formation of these groups holds the risk of exacerbating educational inequities throughout our country.”

So what if money followed kids out of districts and into pods? Could the poor really afford them?

In a Real Clear Policy op‐​ed I lay out some basic numbers: “With public school spending exceeding $15,000 per student, most privates, which charge roughly $12,000 on average, would be in anyone’s reach, while families pooling ten kids could offer $150,000 to a pod teacher.”

A recent CNBC article can help to flesh this out, listing prices for various pod arrangements. Let’s break them down a bit.

First, using the latest federal data and adjusting to 2020 dollars, public schools nationally spend a total of $15,827 per student. If we remove capital costs it is $14,024.

The first breakdown of costs in the CNBC article is an arrangement paying a teacher $75 to $80 an hour for 4 to 6 kids, or roughly $13 to $19 per hour per child. For all scenarios, we’ll suppose 5 hours of instruction for about 180 days. At the $13 rate (getting together at least 6 kids would not be that difficult) we get:

The second breakdown (skipping Outschool, which is pretty à la carte) is Pupil Pod, which enables 6 students each to pay $17 an hour for a teacher:

This is tougher in all scenarios than the first example, but sharing the education money would still go a long way towards making Pupil Pod affordable to all.

Next, there’s Swing Education, which charges around $330 per week per student for a pod of 8. For 36 weeks of instruction:

Finally, there is a partnership of three private schools that offer pod instruction. CNBC estimates $1,389 per student per month. For 9 months:

Only in Oakland would parents need to scrape together more than the current per‐​pupil expenditure, and not a lot more.

Were public schooling dollars to follow kids, it appears that pods would be within financial reach of almost everyone, often with funds left over. So instead of decrying inequality, public schooling groups should be saying, “Here, have the money.”

This article by Neal McCluskey first appeared in CATO on August 11, 2020.