Is Pompeo Trying To Make China Into the New Soviet Union? 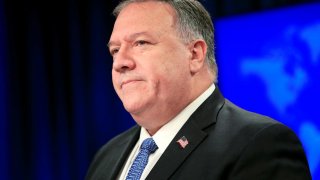 US Secretary of State Mike Pompeo gave a landmark speech on 23 July titled ‘Communist China and the free world’s future’ in which he made it plain that China was now America’s main national security threat. The central theme of his speech was the Chinese Communist Party’s—not the Chinese people’s—designs for global hegemony.

This was clearly a well-prepared and strongly positioned speech. Pompeo said that it was the fourth in a series of China speeches; the other three were delivered by National Security Adviser Robert O’Brien, FBI Director Chris Wray and Attorney General William Barr. All this points to a coordinated position in the US administration on the threat from China.

However, the question now is, can we work on the principle that President Donald Trump is of the same view? Pompeo’s speech was mainly about the ideological threat from China’s communism, whereas Trump is much more focused on transactional issues, such as trade and business. Even so, neither Beijing nor the rest of us can afford to dismiss this speech.

The following is a selection of some of the more important assertions by Pompeo:

Some of the reactions to the Pompeo speech in Australia have been to describe it as ‘scary’, whereas others consider it was a compelling assessment of China. The fact is that Beijing has now been plainly informed by the US that the relationship has changed and that it can expect much more forceful responses from Washington in future.

This is not the first time that America has launched such a provocatively worded policy against its main adversary. In 1983, President Ronald Reagan made his infamous ‘evil empire’ speech, which identified the Soviet Union as ‘the focus of evil in the modern world’ and characterised the US conflict with the USSR as a battle between good and evil. Some commentators believe that Reagan’s speech and his subsequent ‘Star Wars’ threat laid the groundwork for the ultimate collapse of the Soviet Union.

But nobody should expect the Australian government to endorse Pompeo’s speech or use his ideological language. Indeed, at the recent AUSMIN meeting, which occurred five days after the speech, Foreign Minister Marise Payne made it plain that Australia’s positions on China are our own and ‘we make our own decisions, our own judgements in the Australian national interest’. Even so, careful scrutiny of the joint AUSMIN statement reveals that it is overwhelmingly about both the coercive and the assertive threats from China.

This article by Paul Dibb first appeared in The Strategist on August 13, 2020.