Power Projection: Why the USS Nimitz Supercarrier Can Fight Anyone Anywhere 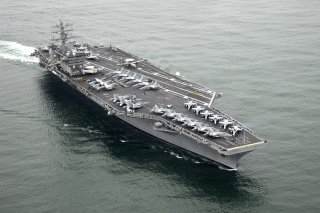 Here's What You Need to Know: The Nimitz-class aircraft carrier is unquestionably a symbol of American might and power projection abroad.

At 1,092 feet, the Nimitz-class supercarriers are more than three times the length of a football field, and with a crew of 3,200 sailors and 2,480 airmen, these are essentially floating cities. The lead ship of the class, USS Nimitz—nicknamed "Old Salt"—was commissioned in May 1975, was named after Adm. Chester Nimitz, who led the U.S. Navy through World War II.

In addition to the aircraft, the most recently built Nimitz-class carriers are now armed with three Raytheon GMLS mk29 eight-cell launchers for NATO Sea Sparrow surface-to-air missiles, which has semi-radar terminal guidance. There are also four Raytheon/General Dynamics 20mm Phalanx six-barreled Mk15 close-in weapons systems that have a 3,000rpm rate of fire.

While the last of the Nimitz-class carriers have been commissioned, and the class will eventually be replaced by the Gerald R. Ford-class, these ten carriers will still strike fear into potential U.S. adversaries for many years to come.