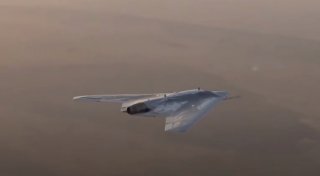 Here’s What You Need to Remember: t’s unclear whether the new exhaust also will require Sukhoi to install a new engine on the Hunter. A change of powerplant could complicate Russia’s efforts to speed Hunter into front-line service. But the extra work likely is worth it. A flying wing similar in shape to the U.S. Air Force's B-2 stealth bomber, Hunter, in theory, could penetrate enemy defenses to deliver ordnance. The design greatly would benefit from all-aspect stealth.

Photos from The War Zone editor Tylor Rogoway obtained last year from the Sukhoi pavilion at Russia's MAKS air show in Moscow oblast reveal what is apparently the ultimate version of the fighter-style Hunter.