Project Overmatch: What Is Behind this Navy Warfighting Program? 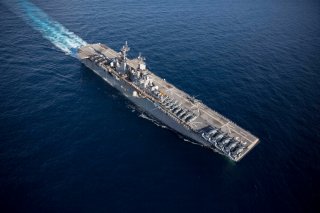 Here's What You Need to Remember: The thrust of the Navy’s Distributed Maritime Operations strategy rests upon the secure networking and processing of warfare information, as disaggregated nodes such as space-based sensors, air drones, submarines, surface ships and even fighter jets can be greatly dispersed across a vast combat envelope, yet still closely connected by long-range sensors and communications networks.

It is a multi-domain focus for the Navy, operating within a conceptual framework calling for a heavily armed, yet distributed and highly networked fleet. It would be safe to say that “information processing,” speed, and shortening the decision-making cycle to exponentially decrease “sensor-to-shooter” time is now a defining concept in the Pentagon’s multi-domain focus on future warfare. Information at the “speed of relevance” from space, surface, to air, to ground, to undersea… is the sought after goal.

Much is discussed in terms of the Pentagon’s overarching Joint All Domain Command and Control (JADC2) strategy, and we hear often about the Army’s breakthrough Project Convergence successfully connecting forward mini-drones with larger drones, helicopters, robots and armed combat vehicles to attack enemies in seconds.

What about the Navy? The maritime effort is called “Project Overmatch,” and while it may get less attention, efforts to better gather, organize, network and protect information across air, sea and undersea domains continue to generate unprecedented progress.

The thrust of the Navy’s Distributed Maritime Operations strategy rests upon the secure networking and processing of warfare information, as disaggregated nodes such as space-based sensors, air drones, submarines, surface ships and even fighter jets can be greatly dispersed across a vast combat envelope, yet still closely connected by long-range sensors and communications networks.

This can both bring the maritime warfare impact of close coordination, yet within broader, more dispersed formation. This tactical approach is increasingly reflected in Navy and Marine Corps strategic thinking, which not only continues to massively emphasize unmanned systems but also elevates information processing and transmission across domains as a fundamental strategic warfare objective.

“Future force development requires a wider range of force options and capabilities. The Marine Corps must be able to fight at sea, from the sea, and from the land to the sea; operate and persist within range of adversary long-range fires; maneuver across the seaward and landward portions of complex littorals; and sense, shoot, and sustain while combining the physical and information domains to achieve desired outcomes,” the Corps report says.

Expeditionary warfare, firepower, increasing long-range precision fires, dispersed unmanned systems, lighter, smaller amphibs and EW attack technology are all described by the Marine Corps paper; they do not seem at all surprising as key tenets or points of emphasis in the Corps’ strategy, and the text also introduces some uniquely modern variables and applications, which represent interesting steps forward and adaptations to a fast-evolving modern threat environment.

Force Design 2030 highlights the importance of expeditionary warfare in the Indo-Pacific and a need to adapt to and embrace new, evolving, high-tech “threat assumptions.”

It is upon this foundation that the Navy is working with various industry partners to refine radar, EW, Synthetic Aperture Sonar, optical networking, RF datalinks and other communications technologies to further evolve multi-domain maritime networking as part of Project Overmatch.

Northrop Grumman, for instance, continues to work with the Navy on multi-domain mission systems, command and control and digital networking technologies to help the Navy and Marine Corps transition to a more dispersed, yet highly connected force ready for great power warfare on the open ocean.

“The Marine Corps has been a ‘second land army’ largely for the last 20-years or so, so we are now focused on supporting their move back toward their expeditionary, amphibious roots. It requires a different force structure, it requires different hardware and software and using existing systems in new ways,” Tom Wears, Director, Program Development, Maritime/Land Systems, Sensors Division, Northrop Grumman Mission Systems, told Warrior in an interview.

Northrop Grumman supports sensors, networking and command and control for the “Mission Systems” supporting anti-submarine, surface and countermine warfare modules for the Littoral Combat Ship and delivers the Marine Corps G/ATOR radar and upgraded EW systems, among other things.

The AN/TPS-80 Ground/Air Task Oriented Radar (G/ATOR), is a Marine Corps system which Northrop continues to upgrade by migrating from analog to digital surveillance technology and expanding targeting range and aperture. Wears said Northrop Grumman was adjusting the legacy or basic G/ATOR radar by adding new sensing elements so it has a “denser pattern.” He also said Northrop Grumman was working on expanded capabilities for the G/ATOR system and performing multiple software upgrades to tie into an integrated fire control kill chain.

SEWIP Block 3 is intended to simultaneously track, deceive, “jam” and derail multiple inbound weapons that may be using different frequencies. The emerging Block 3 variant advances the technical features for EW by adding an advanced offensive electronic attack capability and a future capability to integrate Electronic Warfare with Information Operations (IO), among other things.

SEWIP B3 is an electronic attack weapon that is not limited to locating, jamming and disrupting inbound threats; it is also capable of conducting offensive operations against enemy radar systems and other electronic sources.

The system is currently designed for installation on Navy DDG-51 Class Destroyers and is on track to be operational in the next few years, Northrop developers explain. Navy officials tell Warrior that the service’s new Frigate is also being engineered for configuration with advanced EW systems.

“The SEWIP System is designed and constructed to defend against the anti-ship cruise missile threat,” Wears said. He also mentioned the significance of multi-function hardware such as Active Electronically Scanned Arrays (AESA) to break new ground with combat networking.

The SEWIP Block 3 EW system uses a collection of 16 Active Electronically Scanned Arrays, or AESAs, to emit groups of targeted “pencil” beams, as opposed to wide overlapping beams, Northrop developers say. This allows narrowly tailored and specifically focused “beams” able to “put energy only where it is needed,” as one Northrop Grumman engineer explained it.

All of this is, as a part of the strategy, is closely woven into a commensurate effort to synergize systems such as G/ATOR Radar, SEWIP, and Synthetic Aperture Sonar with “information Operations.” A future concept is to connect crucial intelligence gathering technology with EW attack and defense systems by synthesizing IO and EW.

Part of this is accomplished through consistent continuous software upgrades and threat monitoring. It is upon this foundation that Northrop developers are expanding the EW technology by integrating it with Information Operations (IO). Part of this EW/IO integration is evolving through an initiative to connect advanced EW with communications; this not only helps identify approaching threats with better fidelity but also works to de-conflict the EW Spectrum, which might otherwise be overloaded by multiple systems on a single ship.

These and other technologies support the Navy-Marine Corps strategy by virtue of strengthening and extending range, security and speed of information transfer in warfare.

Maneuvering into attack position, it would seem clear, might be entirely different should targeting and surveillance specifics b

These variables, therefore, when viewed as an integrated or networked “whole” can merge classic Corps’ warfare concepts such as maneuver warfare and the use of heavy, yet precise firepower, combined to introduce unprecedented combat dynamics.

Detecting and thwarting anti-ship missiles more quickly and at greater ranges, made possible in part by advanced networking and sensor systems such as SEWIP and G/ATOR is intended to successfully enable more dispersed, yet interconnected multi-domain maritime warfare.

This brings the advantage of proximity while simultaneously allowing both greater stand-off range and a much wider operational combat area within which to maneuver and conduct operations.