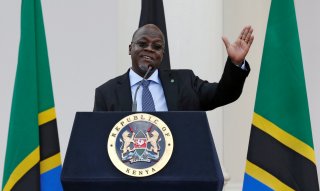 All-powerful presidents are an essential part of a stereotypical representation of African politics controlled by a few individuals, rather than by institutions. This view has been reinforced by a literary tradition sanctifying the biographies of “great men” while demonising more troubled political figures.

The academic discourse has for a long time reproduced these stereotypical biases. To paraphrase the political scientists Robert H. Jackson and Carl G. Roseberg, African politics is interpreted as the playground of a few prophets, tyrants and princes.

Yet, the important question remains: why did, on independence, almost all African states (with the notable exception of Ethiopia for example) adopt a presidential system of rule? Put differently: what are the historical origins of presidential power in postcolonial African countries? This is the question my book, Power and the Presidency in Kenya: The Jomo Kenyatta Years (1958-1978), sought to answer.

Since the 1990s, the role and importance of African state institutions has grown beyond question. But caricatures of African presidents have persisted in popular culture. The success of the British film The Last King of Scotland (2006) about Idi Amin Dada, Uganda’s dictator from 1970 to 1979, shows a fascination with the African dictator. He’s pictured as a dangerous and eccentric figure, yet never as a serious political actor.

More recently, however, scholars have emphasised that African presidents’ purportedly excessive personalities must be considered as serious political strategies. Alicia Decker, author of In Idi Amin’s Shadow, has shown, for example, that Amin’s hyper-masculinity was a political strategy. Others have found that behind this show, autocrats strategically use the power of ideas to legitimise their rule.

These arguments are necessary to challenge the stereotypical representation of African presidents. Writing a different narrative on African presidential history first required the deconstruction of a notion that has been increasingly criticised: that of the “father of the nation”.

Father of the nation

Why, when and how did Kenyatta become the “father” of the Kenyan nation? By the time the independence negotiations started in the early 1960s, Kenyatta was living under restriction. He had been (falsely) convicted by British colonial authorities for being the leader of the Mau Mau. The movement emerged in the early 1950s in protest over colonial land alienation, economic inequalities and political oppression. The Mau Mau was crushed in a brutal counter-insurgency war.

Though the sentence turned Kenyatta into a (Mau Mau) martyr, his relationship to the movement was much more ambiguous. He had always publicly denounced Mau Mau fighters as “terrorists” and the movement as a “disease”.

There was, however, little consensus among the Kenyan political elite as to whether he should become ‘father of the nation’. As a moderate politician and defendant of a centralised state, his leadership aroused much opposition. Yet no other leader could claim to be both a friend and an enemy of the Mau Mau. Kenyatta was the only politician who could embody reconciliation in a country torn apart by colonial rule and the Mau Mau war.

Until Kenya became formally independent in 1963, the negotiations focused on land decolonisation and whether the future state apparatus should be centralised or decentralised. As Kenyatta and his party, the Kenya National African Union, formally took over the government, the debate took an unexpected turn: what would the limit of executive powers be within a centralised government?

Only a few wanted Kenyatta to become president and fewer wanted him to be granted extensive executive powers. The question created a great deal of tension among the Kenyan elite, to the point that Kenya’s transition to becoming a republic was delayed by one year. Parliamentarians specifically contested the provisions made by the draft independence constitutions that

the President has power to make any appointment or make any order or do any other thing (my emphasis).

Yet these debates had come too late in the independence period to negotiate. The British government saw Kenyatta as politically indispensable to hold a divided country together. And so, indeed, he was. He had no stake in compromising his political plans, or softening his ambitions. No one could resist the extended (almost limitless) and ill-defined executive powers he was granted.

Upon independence, Kenyatta knew he was surrounded by a deeply divided political elite. He was a shrewd politician and understood how to keep his enemies not only close to him, but also close to state resources by nominating them to important political positions. Besides, he had no other choice but to remain a discreet and distant president, to remain aloof from political tensions.

Kenyatta’s political rise, one made of unpredictability – and isolation – set the tone for future presidential power in Kenya. It showed that far from the myth of the omnipotent father of the nation, big man or dictator, the strength of the Kenyan presidential system was built on divisions and uncertainty.

Read more: Why Kenya's Mau Mau gave up their fight

This shows that presidential power has a more complex history than popular stereotypes would have us believe. It requires political intelligence, rather than irrationality or uncontrolled passions, for the president to understand and hold both his allies and enemies together.

Until today, the presidency in Kenya remains the sole institution that strongly resists attempts to decentralise the political system. Nevertheless, presidential rule is also evolving. While Kenyatta became an increasingly imperial leader, his successors – and his son and current President Uhuru Kenyatta in particular – further turned the presidency into an increasingly authoritarian and dynastic institution.

But one things remains: no matter how strong the presidential institution is, it was and is still built on profoundly fragile alliances.

With the 2022 presidential contest approaching, the president’s party is profoundly divided between Uhuru’s camp and that of his former ally, Deputy President William Ruto. Uhuru’s new ally is his longtime adversary Raila Odinga. This signals not only that Uhuru is, just like his father, using his presidential privileges to turn his enemies into allies, temporarily at least, so as to remain in power in 2022.

In a context of political and economic insecurity created by the COVID-19 pandemic and continuous weakening of civil society, it might well be that Uhuru’s presidential powers will be stronger than ever.

A version of this article was recently published by Democracy in Africa.