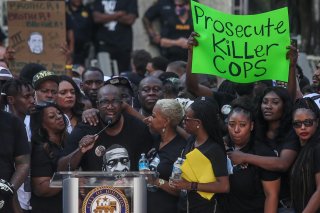 In George Floyd’s hometown of Houston, Texas, tens of thousands of people have shown up to protest his death but the city has seen fewer instances of violence than other protest sites.

Floyd spent most of his life in Houston’s Third Ward, the fourth-largest and most diverse city in America.

Protestors and leaders are aiming to make the best of the current situation by uniting through it, and Houston is reporting less instances of violent acts. According to the WSJ, there have been smashed windows but no building fires and a heavy law enforcement presence but no enforced curfew.

“Things were relatively peaceful—with an asterisk,” Durrel Douglas, the executive director of the organizing group Houston Justice, told the WSJ. The asterisk covering individuals around Douglas who were arrested for nonviolent offenses, and an instance where a police officer on horseback ran over a protester, which Mayor Sylvester Turner quickly issued a public apology for.

Houston Police Chief Art Acevedo was seen walking alongside protesters after being one of the first members of law enforcement to speak out on the death of Floyd.

It is too early to evaluate how the Houston department handled the protests, Acevedo told the WSJ. The police chief said that though the police force “had its problems,” officers “have had the courage so far, thank God, not to overreact.”

“We’ve been able to actually cry with people, openly cry when we’re marching. I want to send a message to my officers, what I know to be my truth: that the very vast majority of the people marching are in support of good policing and in condemnation of bad policing,” Acevedo told the paper.

Image: Philonise Floyd, brother of George Floyd, who died in Minneapolis police custody, is surrounded by family members as he speaks at a protest rally against his brother’s death, inHouston, Texas, U.S., June 2, 2020. REUTERS/Adrees Latif.