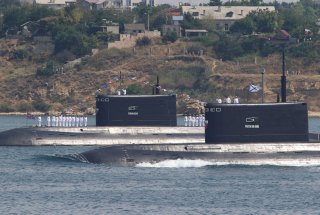 Key Point: This submarine was made for very deep dives. Unfortunately, a fire broke out their crew was lost.

Losharik’s design is quite unique. Inside the streamlined outer hull are seven titanium spheres. The rear two spheres house the sub’s nuclear reactor and propulsion unit, while the forward five spheres provide space for crew and equipment. The submarine is presumably quite cramped, but these spheres allow the submarine to dive thousands of feet below the surface, to depths that would crush most other submarines—supposedly over 8,000 feet, or about 2,400 meters.

The Losharik also has a few features that lend credence to the idea that it is a spy sub. It has four retractable skids that would allow the sub to sit the ocean floor, protecting the propeller and control surfaces from damage, and at least one extendable robotic arm that can manipulate objects outside the submarine. The Losharik had previously taken ocean floor rock samples to bolster Russia’s claim to wide swaths of the Arctic region.

Caleb Larson holds a Master of Public Policy degree from the Willy Brandt School of Public Policy. He lives in Berlin and writes on U.S. and Russian foreign and defense policy, German politics, and culture .