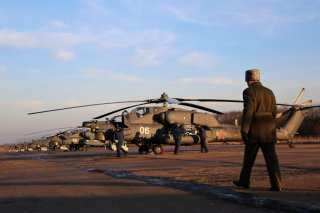 The Mil Mi-28 (NATO reporting name “Havoc”) attack helicopter is similar to a lot of Russian military hardware. Its development began in the 1980s but progress was slowed with the collapse of the Soviet Union. In recent years the design was revisited and then upgraded. And unlike other Russian helicopters, the Mi-28 was never intended to serve in a secondary transport capacity.

The all-weather, day and night, two-seat Mi-28 has been seriously updated to the Mil Mi-28NM “Night Hunter” standard and it should be seen as a highly capable anti-armor attack helicopter. It has been equipped with next-generation missiles and rocket armaments.

“In the course of joint work, we focused on expanding the range of air-launched weapons of the helicopter’s airborne armament as the basic area of improving Mi-28N baseline helicopters,” Chief Designer of the Combat Helicopters Program at the Mil and Kamov National Helicopter Center Vitaly Shcherbina told TASS on Tuesday.

“For the purpose of solving this task, the airborne armament of the Mi-28NM embraced next-generation round-the-clock missiles, including multirole munitions allowing the gunship to strike targets without entering the area of the enemy’s effective air defenses, and also next-generation rockets of a broad range of their employment and enhanced capacity, as well as bombing weapons of various caliber,” added Shcherbina.

The designer also explained that the chopper has received an onboard armament suite that will allow it to detect and destroy enemy targets in any weather conditions while operating outside of the enemy’s effective air defenses. The advanced defensive aids suite also enables the helicopter to successfully repel attacks from a potential enemy’s ground and airborne air defense systems while the onboard communications system features network-centric capabilities.

“The onboard communications and telecoms system offers a possibility for the helicopters to interact in a group, operate in air and ground communications networks, implementing the network-centric methods of weapons’ control on the battlefield, i.e. to get information on the enemy and friendly forces in a secure jam-resistant mode timely and without delays,” said Shcherbina.

According to the Mil and Kamov National Helicopter Center, which is a subsidiary of the Russian Helicopters Group within the state tech corporation Rostec, the Mi-28NM gunship performed its debut flight on October 12, 2016, and is an upgraded version of the Mi-28N combat helicopter. However, the “Night Hunter” gunship has considerable differences from the baseline version.

The upgraded variant features a new fuselage design, modernized engines and an auxiliary powerplant, new onboard electronic warfare equipment, and advanced weapons. The layout of the gunship’s fuselage nose section has also been altered to mount a new target sight system as well as a mast-mounted radar, a new sighting and piloting navigation system, and an improved radar station.

The Mi-28NM also offers a dual control system. While the Mi-28N placed the operator in the front cabin, which limited the piloting capabilities, the upgraded version includes full-fledged control from both cabins. This provides enhanced situational awareness for both the commander and pilot and is meant to facilitate interoperability and increase the quickness of making decisions in a complex combat environment.

The Mi-28NM attack helicopter will also be able to launch multiple kamikaze drones upon entering a designated area.