QAnon Uses Satanic Rhetoric To Set up a Narrative of "Good vs. Evil" 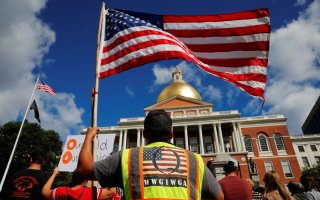 In front of a TV audience on Oct. 15, President Donald Trump declared that he knew “nothing about” QAnon, before correcting himself to say: “I do know they are very much against pedophilia.”

What he didn’t do was disavow what has been referred to as a “collective delusion.” Part of that could be down to QAnon followers holding up Trump as some sort of savior – someone playing four-dimensional chess against shadowy political insiders and power players known as the “Deep State.”

But that is only part of what Anons – followers of QAnon – believe. What Trump didn’t mention is the atrocious claims that underlie this supposed chess match, and the demonic imagery and language that are used in the course of the conspiracy.

As a professor of religion who teaches courses on the cultural significance of monsters, I see many similarities between Anon claims and prior rumor panics that employed satanic rhetoric. Moreover, given the growing popularity of the QAnon conspiracy – and its encroachment into mainstream politics – I believe that ignoring this rhetoric risks harm to those targeted by the conspiracy.

The QAnon conspiracy theory started with an anonymous 4chan post in October 2017. The author, who later signed his or her posts as “Q”, remains unknown. Since then Q has posted anonymous messages, known as Qdrops, on 8chan and now 8kun – on both online message and image boards.

The conspiracy claims that deep-state politicians and the “Hollywood elite” are involved in a large child abduction network that harvests the chemical compound adrenochrome — which is obtained from the oxidation of adrenaline — from sexually abused children subjected to satanic rituals.

Anons say that adrenochrome is consumed by some Democratic politicians and Hollywood elites for its psychedelic and anti-aging effects and is more potent when harvested from a frightened victim. Trump, they believe, is planning a day of reckoning that will see the arrest, conviction and even execution of dozens of current and former government officials for their involvement in child sex trafficking.

In analyzing the Qdrops, I have noted a discourse of evil woven throughout Q’s nearly 5,000 messages. Peppering the Qdrops are claims like “many in our government worship Satan.” According to Anons, Trump is engaged in a battle of cosmic significance between the “children of light” and the “children of darkness” and is working to dismantle pedophile networks that are abducting children for satanic rites.

In using such language and imagery, Q does not portray perceived political adversaries as merely having a difference of opinion, but as being downright evil.

For example, in an Aug. 10, 2018, Qdrop titled “Many in Power Worship the Devil,” Q states: “PURE EVIL. HOW MANY IN WASHINGTON AND THOSE AROUND THE WORLD (IN POWER) WORSHIP THE DEVIL?”

On Aug. 26, 2020, Q posted an image suggesting that the 2020 Democratic National Convention logo resembled a Satanic Baphomet pentagram, which incorporates a goat’s head and a five-pointed star. Accompanying text asserts that one party – Republicans – discusses God while the other party – Democrats – discusses darkness.

Such dialogue rises beyond the level of us versus them. Instead, for Q and Anons it elevates the conspiracy to a matter of cosmic good versus monstrous evil.

This, I believe, is of grave concern. Presenting opponents as monstrously evil dehumanizes them. Through that process, Anons may see themselves as would-be monster-killers ready to use violence to remove the evil.

This process of using the language of evil to dehumanize a perceived enemy is nothing new. It was seen in conspiracies such as the Protocols of the Elders of Zion. The Protocols, a fictional document first published in Russia in the early 1900s, link a satanic Jewish cabal to the Antichrist.

Examining past rhetoric targeting Jews reveals how such a discourse lubricates the machinery of violence – Hitler called the Protocols “immensely instructive.”

Jewish communities faced the blood libel — the idea that Jews kidnapped children for blood sacrifices — for centuries before it resurfaced in the Protocols. In the Middle Ages this was driven by a fear of Jewish magicians kidnapping and stabbing children for evil rituals. The blood produced from these rites was rumored to be ritually consumed as drink or mixed into matzo. It was a demonic fantasy not based in any reality.

It is noteworthy that Anon claims about child abduction and blood consumption are linked to prominent Jewish figures such as billionaire philanthropist George Soros and the Rothschild family.

Joel Finkelstein, of the anti-hate watchdog the Network Contagion Research Institute has noted that the QAnon conspiracy is becoming increasingly anti-Semitic. Indeed, renowned genocide scholar Gregory Stanton warned in an article in September that QAnon’s demonic fantasy was “a rebranded version of the Protocols” and noted that the conspiracy was gaining traction in neo-Nazi circles.

For those who remember the “satanic panic” of the 1980s, these Anon narratives will sound hauntingly familiar. The satanic panic was based on a series of rumors spread by concerned parents and authority figures, ranging from therapists to law enforcement agencies, convinced that a demonic cabal had infiltrated society to its highest levels. Organizations set up to counter this perceived threat, like Believe the Children, argued that children were most at risk in day care centers run by secret satanists. Prosecutors accepted, with apparent earnest seriousness, the claims being made about child sexual abuse, secret tunnels, and satanic rituals at the McMartin Preschool in Manhattan Beach, California. Similar sensational charges were brought against the Fells Acres Day School and the Wee Care Nursery School. Charges were eventually dropped or reversed in many of these cases.

As the unjust prosecutions demonstrate, the satanic panic damaged the reputations and livelihoods of innocent people.

QAnon is poised to cause similar disruptions in the lives of innocent people. Already there have been incidents including the apparent QAnon-inspired shooting of a mob boss and a live-streamed effort to “take out” Joe Biden. Anons are beginning to show a willingness to take matters into their own hands.

Why it matters now

It is tempting to dismiss QAnon as too small and fringe to lead to the violence associated with prior satanic panics. However, the emerging influence of Q is evident. It is seen not only in the growing number of supporters – QAnon Facebook pages alone boast 3 million followers – but also in Washington with a president who declines to disavow the conspiracy and a Republican QAnon supporter, Marjorie Taylor Greene, looking set to head to Congress in November.

The size of the QAnon community is difficult to estimate. It is, by no means, mainstream. But past experience has shown us that when a minority drapes its cause in a cosmic discourse of good versus evil, atrocities can follow.