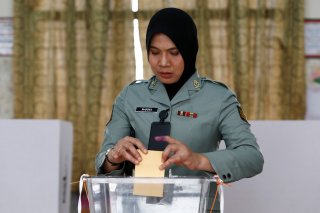 Here's What You Need To Remember: Emerging great power competition provides small states with the agency to balance their economic and strategic ties with countries vying for influence such as China, the United States, India and Japan. While member countries of the Quadrilateral Security Dialogue (Quad) — comprising the United States, Japan, India and Australia — may not individually rival China’s infrastructure investment, collectively they may find competitive advantages through multilateral cooperation.

July was a busy month for US diplomats who have been traversing the Indo-Pacific region, reinforcing US commitment to the region in light of growing concern that Southeast Asian states are moving closer to China.

US Vice President Kamala Harris travelled to Singapore and Vietnam, following trips by Deputy Secretary of State Wendy Sherman to Japan, South Korea, Mongolia and China, Secretary of Defense Lloyd Austin to Singapore, Vietnam and the Philippines, and Secretary of State Antony Blinken to India. Meanwhile, Australian Foreign Minister Marise Payne and Defence Minister Peter Dutton have embarked on a flurry of 2+2 diplomatic meetings in India, Korea, the United States, and Indonesia, in an effort to reboot Canberra’s international diplomacy.

For a region that sees China as an increasingly unavoidable and influential economic and strategic power, this newfound interest by Western powers presents significant opportunities. High-level focus on the region accords small states growing leverage in the competition between the United States and China, which they can translate into economic gains and diplomatic wins to bolster their own domestic political legitimacy.

Indo-Pacific states should embrace Washington’s newfound commitment to the region while it lasts. While Chinese loans, trade and vaccines may be welcomed as timely and much-needed assistance, all three could be weaponised as tools of economic coercion in the future. Some states have dealt with these opportunities and challenges better than others, while a couple of cautionary tales hold lessons for the rest.

For instance, in an effort to become the ‘battery of Asia’, Laos welcomed a flood of Chinese investment in hydropower dams and non-transparent special economic zones (SEZ). While this strategy enabled the inflow of significant sums of foreign direct investment, it also resulted in rampant environmental destruction and inequality, and the country now owes nearly half of its total public debt to China (much like Cambodia).

Myanmar found itself dangerously overleveraged with Chinese corporations involved in massive infrastructure projects approved by the military in the 2000s. But unlike Laos, it managed to successfully renegotiate the terms of the Kyaukphyu Port project in 2018 from US$7.3 billion down to approximately US$1.3 billion, and suspended a controversial hydropower dam in conflict-prone Kachin State. But since a coup in February, the military finds itself more reliant on Beijing for economic investment and diplomatic protection in light of international condemnation.

Similarly, Malaysia under Prime Minister Mahathir Mohamad renegotiated the terms of the East Coast Rail Link project in 2018 and cancelled planned oil and gas pipelines. Singapore has also successfully balanced its economic and security relationships with Beijing and Washington by hedging and cooperating with both great powers.

In South Asia, the Maldives availed over US$3 billion in loans from China for the construction of bridges and airports. Through these loans, over 70 per cent of the Maldives’ external debt was owed to China alone. This overreliance on China led to a political crisis as India stepped in to repay the debt.

While the island nation faced a macroeconomic crisis, the two major political parties accused each other of favouring one country over the other. The debt crisis, coupled with constitutional amendments making foreign ownership of land legal, led to widespread protests. China’s overbearing influence on the country became a point of contention between the ruling party and opposition, eventually leading to a change in government that was closer to India.

The Maldives’ shift in allegiances was ultimately a product of a security deal negotiated by India. In 2018, New Delhi offered US$1.4 billion in aid in exchange for the Maldives distancing itself from China. The Maldives’ debt success was only possible by bringing in a willing regional balancer to support it with alternative financing.

Bangladesh, on the other hand, has been more cautious in its initial participation in China’s Belt and Road Initiative. Dhaka has adopted a ‘prevention is better than a cure’ approach to limit its debt exposure, selecting projects based on their economic and financial feasibility rather than near-term political advantage.

Bangladesh refrained from infrastructure financed purely by debt, and selected power and manufacturing projects over airports and ports based on their ability to generate revenue in the near future, rather than anticipated development or traffic flows in the distant future. Furthermore, a balanced and rapidly growing economy provided it with leverage to diversify its debtors. Historically, Bangladesh has had cordial relations with India and strong macroeconomic fundamentals, such as GDP growth rates and external debt, allowing it to leverage competition between India and China.

Emerging great power competition provides small states with the agency to balance their economic and strategic ties with countries vying for influence such as China, the United States, India and Japan. While member countries of the Quadrilateral Security Dialogue (Quad) — comprising the United States, Japan, India and Australia — may not individually rival China’s infrastructure investment, collectively they may find competitive advantages through multilateral cooperation. Japan has provided more official development assistance to the region compared with China, while Japanese infrastructure investment and US foreign direct investment across Southeast Asia have long outmatched China’s. The Quad’s pledge in March to provide vaccines to Indo-Pacific countries was a welcome announcement, particularly as regional states begin to doubt the efficacy of Chinese vaccines.

This is no simple matter of passively accepting dolled-out public goods from the great powers. As the cases of Bangladesh, Malaysia, Myanmar and Singapore suggest, small states must wield agency to find viable economic strategies that simultaneously protect states’ sovereignty by avoiding overexposure to any one powerful country.

Hunter Marston is a PhD candidate in International Relations at the Coral Bell School of Asia Pacific Affairs, The Australian National University, University, a non-resident WSD-Handa Fellow at Pacific Forum, and an associate with 9DashLine.

Akhil Ramesh is a Non-resident Vasey Fellow at Pacific Forum, USA. This article was originally published in East Asia Forum.