Race Was Central to the U.S. Capitol Attack 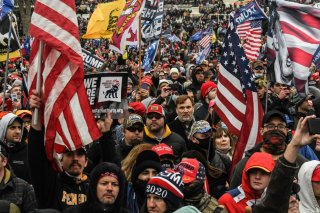 The attack on the US Capitol on 6 January has been interpreted in multiple ways. The most common interpretation asserts that President Donald Trump’s narcissistic obsessions and highly inflammatory rhetoric were responsible for the sordid events of that day. A second interpretation attributes the mayhem to the high degree of party political and ideological polarisation in the country. Economic uncertainty and distress caused by the Covid-19 pandemic is cited as another major factor contributing to anarchy and political breakdown.

There’s truth in each of these assertions. But all of them discount the elephant in the room, namely, the deep sense of anxiety, indeed apprehension, felt by a sizeable portion of white Americans that their patrimony is being stolen from them. This deep-seated angst was why Trump’s assertions that the election had been ‘stolen’ from him touched such a sympathetic chord in so many. It also lies at the heart of the anti-immigration sentiment in the country that Trump stoked time and again both before and after taking office.

Trump’s nihilistic rhetoric and false claims only accentuated an underlying fear whose main cause has little to do with economics or political ideology and much to do with race. The predominantly white composition of the crowd that attacked the Capitol, chanting for the reclamation of their birthright and for the blood of House Speaker Nancy Pelosi and Vice President Mike Pence, whom they consider traitors to their cause, is clear testimony to this fact.

Whites constituted about 73% of the American population in 2017. But if one excludes Hispanic whites, most of whom identify as Latino rather than white, the proportion falls to 61%. It’s expected to fall below 50% by 2045 as a result of immigration and low birth rates. The anti-immigration and militantly white supremacist attitudes of many Trump supporters is a product of their fear of becoming a numerical minority—a feeling that Trump plays to with his virulent anti-immigrant rhetoric.

To white supremacists, Barack Obama’s election as president in 2008 and again in 2012 was a turning point; it seemed to signal the end of the US as a ‘white’ country and spawned the ‘birther’ movement, of which Trump was a part, that sought to discredit Obama as foreign born. Now, the election to the highest office of Obama’s vice president, Joe Biden, who’s seen as the inheritor of Obama’s political legacy, with African Indian American Kamala Harris as his deputy, has further increased the apprehension among a segment of white Americans that they are being deprived of their rightful place in the pecking order in the United States.

A dramatic increase in the African American voter turnout in the presidential election has added to those fears. The fact that black voters determined in large part the outcome of Georgia’s Senate runoffs on 5 January that led to the Republicans losing both seats has further enhanced the sense of ‘disenfranchisement’ harboured by sections of the white population. The prominent display of Confederate flags during the attack on the Capitol, confirms this conclusion.

Trump’s refusal earlier in the year to categorically condemn white supremacist groups and their attacks on Black Lives Matter protestors emboldened these elements no end. It’s a shame that the party of Abraham Lincoln has for the past four years been colluding with white supremacists, propagating their racist ideology and undermining the foundations of America’s constitutional democracy in order to achieve ephemeral gains. The backlash the party faces following the domestic terrorism of 6 January demonstrates the counterproductive nature of this strategy.

All these signs suggest that support for Trump’s fabricated claims is largely a product of the anxiety that the US is changing ‘colour’. In this sense it is a rerun of the scenario preceding the Civil War. One of the main drivers of that conflict was the threat that the emancipation of black slaves was seen to pose to white privilege. Let’s hope matters don’t reach the point of no return as they did in 1861 and that this rush to the precipice will be halted and reversed before it’s too late. A second impeachment of Trump is essential to bring the US back to its much-vaunted constitutional roots.

There’s much talk in Washington these days about the relative merits of accountability versus healing. This is a false dichotomy. Both can take place, simultaneously reinforcing each other. But for that to happen, it’s imperative that the Republican Party take the lead on both counts—by holding Trump accountable and by reaching out to the Democrats.

Only then can America’s body politic begin the process of healing from the severe wounds inflicted by a Republican president enabled by a collaborating GOP leadership several of whose members outpaced the president in their inflammatory rhetoric.

May wisdom finally dawn on Republican leaders in Congress and in the states that they must take responsibility for the horrendous mistakes that culminated in the attack on the Capitol and that they need to make amends for their errors quickly.

This article first appeared at the Australian Strategic Research Institute.