Radical Civility: How to Live Alongside Racists and Still Call Them Out 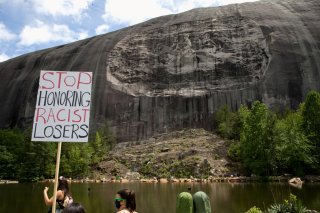 This summer, Americans’ treatment of marble and bronze statues has exemplified an important divide in how we judge public discourse. In the name of anti-racism, statues of Confederate heroes like Robert E. Lee, former Canadian prime ministers like John A. Macdonald and colonial murderers like Christopher Columbus have been torn down, supported by the argument that these are painful reminders to many of our citizens.

Are these actions acceptable? Do they cross a line? Why does that line matter? These are the questions of civility, and some of the most urgent of the current moment.

Statues celebrating slavery are an assault on descendants of enslaved people and a reminder of a time when lynching was all too common. If these statues celebrate slavery, then civility — which requires equal treatment of all — demands their removal. Strong civility also demands a public conversation about southern racial history, and how these statues figure into it.

Democracy is a way of life

Democracy is not just a system of government that preserves rights and freedoms and allows for voting and public consultation. It is also a way of life. Democracy requires that we learn how to live well with others who are different from us. Those differences can range from skin colour to religious affiliation and beliefs about progressive taxation.

But we need a way to preserve enough social cohesion, in the face of all of those differences, to create change and work toward an anti-racist future. That means we have to be willing to be made uncomfortable, and to make others uncomfortable. As American comedian Larry Wilmore has pointed out:

Toxic incivility — threatening to assault others and destroy property — threatens the social fabric that preserves democracy as a way of life. Examples include Tucker Carlson’s acrimonious rants on Fox News (“Black Lives Matter is coming for YOU,”) and sociologist James Thomas’s suggestion that students ruin legislators’ lunches because “They don’t deserve your civility.”

We’re in a dangerous moment right now because our social fabric has been so badly strained and torn by partisan incivility, led by a president whose central communication strategy is to insult and demean those who oppose him and a cable news network that profits from the demonization of others.

Civility matters for democracy because it offers us a set of communication practices for engaging our differences without recourse to violence. Yet sometimes there are ideas at play that undermine a basic sense of equality. Engaging in debates about the humanity of others is uncivil and pointless.

But shunning or cancelling is not the only alternative. Our aim ought to be to persuade others, to change their minds and to transform the social world we inhabit. To do this, we must engage deeply with others that are different from us, which is a risk for any of us.

We’re not talking about “mere civility” as a practice of being polite in order to make people feel comfortable, which can be used as a weapon of oppression. We’re talking about a kind of radical civility, a set of practices that can engage differences in ways that will deepen a sense of community and help create possibilities for change.

This requires careful listening, respect, openness to dialogue and other-centred communication practices. Yes, even with someone who we clearly think is racist, whether it’s a friend, acquaintance or your inappropriate uncle. Often radical civility is most important for those in traditionally privileged social positions.

Meeting people where they are, regardless of how noxious we might believe that place to be, is necessary for persuasion. Any teacher of rhetoric, and we’ve both spent our careers teaching and writing about rhetoric, knows this.

So that brings us to the big question: Why be civil to a racist?

Our willingness to see others, even racists, as multi-dimensional human beings, capable of change and transformation, is central to living in a democracy. Radical civility can, and often does, include conflict. We should call out a racist and challenge their beliefs, but we should do so in a manner that deepens engagement; that is tough, demanding work.

Violence toward statues is debatable in the context of trying to collectively figure out how to change a racist system. What matters is the way we choose to communicate with one other, and the methods and practices we use, so that our relationships with others can become resources for change.

Whether on the left or on the right, when communication practices demonize, objectify and belittle others, we forgo the possibility of persuasion or even empathy. The question facing our democracy right now is whether we can find ways to treat others with respect and consideration, draw them into public conversation and change their minds.

This is a task for strong civility, and it will mean that tearing down the monuments to slave owners will produce durable social and political change instead of animosity and division. Strong civility offers us the best set of communication practices for repairing the torn social fabric and making possible what’s next for our democracy.

Without it we’re just deepening the cycles of polarization and anger.