The RAH-66 Comanche Stealth Helicopter: Why Did It Fail? 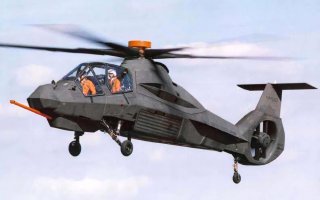 These assertions make some sense, but are also easily dismissed thanks to the noticeable lack of stealth rotorcraft in America’s arsenal. How could lessons from the Comanche really be used if the premise itself doesn’t carry over into further programs?

One high-profile possibility came in the form of images that emerged following the raid on Osama Bid Laden’s compound that resulted in the death of the terrorist leader… As well as the loss of one highly specialized Blackhawk helicopter. Immediately following the announcement of Bin Laden’s death, images began to surface online of a very unusual tail section that remained intact after American special operators destroyed the downed helicopter to ensure its technology couldn’t fall into enemy hands.

The tail is clearly not the same as the tail sections of most Blackhawk helicopters, and its angular design certainly suggests that it must have come from a helicopter that was intended to limit its radar return. Eventually, stories about America’s Special Operations Stealth Blackhawks, or Stealth Hawks, started making the rounds on the internet, and recently, the team over at The Warzone even managed to dig up a shot of just such a stealthy Blackhawk–likely a predecessor to the helicopters used in the historic raid.

While these modified stealth helicopters are not Comanches, the modifications these Blackhawks saw were almost certainly informed by lessons learned in the RAH-66 program. Reports from the scene of the raid also indicate how quiet the helicopters were as the American special operations team closed with their target. Clearly, efforts made to reduce the helicopters’ radar cross section, infrared signature, and noise level were all in play during the Bin Laden raid, just as they were within the Comanche prototypes.

And then there’s Sikorsky’s latest light tactical helicopter, the S-97 Raider. Its visual cues are certainly reminiscent of the company’s efforts in developing the RAH-66, and its performance is too. The S-97 Raider has been clocked at speeds in excess of 250 miles per hour–faster even than the proposed Comanche’s top speed–and like the Comanche, the Raider is nimble to boot.

The RAH-66 Comanche stealth helicopter may have been a bit too forward reaching for its time, but the lessons learned throughout its development and testing have clearly found new life in other advanced programs. With defense officials increasingly touting the value of stealth to increase combat aircraft survivability, it seems certain that we’ll see another stealth helicopter enter service at some point; And when we do, it will almost certainly have benefitted from the failures and successes of the Comanche.