Railguns: The Super Weapon Everyone Wants (But Might Not Happen) 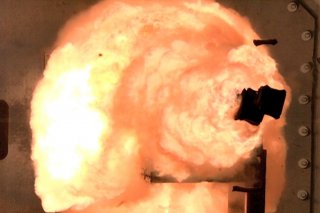 Here's What You Need to Remember: The Chinese are getting closer to fielding a true railgun, while the United States Navy has continued to see the potential for such a weapon on its stealth warships—even if the expected rate of fire would be just ten rounds per minute.

While the concept of “directed-energy weapons” originated on the pages of pulp novels in the late nineteenth century, another weapon technology that seems straight out of science fiction was first theorized by a French inventor during World War I.

The concept of the railgun, a technology that could utilize a large circuit to launch a projectile far further than one launched via the use of a chemical reaction, was developed by Andre Louis Octave Fauchon-Villeplee. He created a simple electric cannon, which caught the attention of the French military—who were seeking a weapon that could rival such long-range cannons as Germany’s so-called “Paris Gun.”

Under the direction of the Director of Inventions at the French Ministry of Armaments in 1918, Fauchon-Villeplee was charged with developing a thirty to fifty millimeter electricannon based on his simple design. While it might seem revolutionary today for the French military to be so forward-thinking, it should be remembered that at the start of the war its uniforms and tactics were little changed from that of a generation earlier.

But France also saw the need to modernize and underwent a number of wartime reforms. This included the use of the first infantry combat helmet, but France soon follow its British ally’s lead to develop tanks. Likewise, Germany developed zeppelins to bomb England and later developed some of the earliest heavy bombers. Therefore it is almost surprising that one of the countries didn’t somehow develop a successful railgun, but the simple fact is that the war ended before Fauchon-Villeplee’s experiments were able to progress very far.

Moreover, he was simply ahead of his time.

During World War II, Joachim Hänsler of Nazi Germany’s Ordnance Office also developed a concept for a railgun that that was supposed to launch projectiles at a speed of two thousand meters per second. When plans for the weapon were discovered after the war, U.S. researchers found that the downside of this concept was that it required enough power to illuminate half of Chicago at the time.

Because of the appearance of railguns in various computer/video games such as Quake II and Metal Gear Solid, there is a misconception that it is a type of heavy “laser cannon.” Most of the video games also suggest that a railgun could be a sort of small arm like a large rifle or machine gun—or even a cyber attachment like a robotic arm! Video game designers clearly didn’t get the memo about the amount of energy required to power such a weapon.

Only the shooter game Battlefield: 2142 envisioned a stationary, anti-vehicle emplacement as being a railgun, but even that probably misses the mark in terms of the scale for such a heavy armament.

In truth, a railgun is basically a large electric circuit that consists of three parts including a power source (a big power source), a pair of parallel rails and a moving armature. This is actually a fairly simple concept—but the trick is getting enough power. The current used in medium to large-caliber railguns would need to be in the millions of amps.

Likewise the rails, which need to be of a conductive metal such as copper, would need to be four to thirty feet long or longer. Already it is easy to see why it would be terribly difficult to have a railgun the size of a rifle or machine gun. Then there is the operation.

Simply put, this creates an electromagnetic force that can launch high velocity projectiles.

There are several significant advantages over traditional explosive projectile weapons. The first is that much higher velocities can be reached—potentially Mach 10 at sea level, or more than three times the muzzle speed of an M16 rifle. The range could be upwards of ten times that of traditional explosive projectile weapons. Because of the high speed, mass and kinetic energy the projectile doesn’t need to contain explosives to inflict damage.

In fact, the kinetic energy could be so great that a non-explosive projectile could do as much damage to a warship as a Tomahawk missile. Moreover, the high speeds could be far more accurate as these are less affected by factors such as wind.

Given the fact that the weapons are so accurate and deadly but not widely adopted must mean there are issues—and there are actually plenty. The first is the aforementioned power supply. Even today the amount of energy to power the weapons is simply not feasible, which is why railguns would likely be confined to a warship or other platform that could in fact supply that demand for power.

Then there is the issue of resistive heat, which can damage the surface of the rails. Heat has been a problem with machine guns since their invention and an early solution was to water cool the barrel, while later the best option was to swap out the barrel and maintain fire discipline. Cooling options are being explored, but a weapon that can’t be repeatedly fired without damaging the system isn’t something any military is likely to adopt.

The final problem is that because the currents can also create serious wear and tear—meaning many prototypes will break after just a few uses.

The problems aren’t so great that railgun research has been abandoned. Far from it in fact, and the Chinese are getting closer to fielding a true railgun, while the United States Navy has continued to see the potential for such a weapon on its stealth warships—even if the expected rate of fire would be just ten rounds per minute.

While that is slower than many cannons on the warships the railgun could be more accurate and far more devastating, which is why the research into once might have been an ideal that seemed almost fantastical continues today.

This article was first published last year and is being reprinted due to reader interest.

U.S. Navy: Railgun Tests to “Blow the Top Off a Mountain”