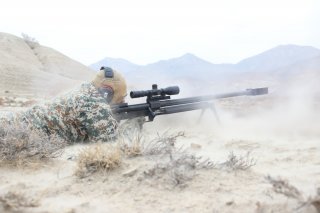 Here's What You Need To Remember: The rifles are popular due to the generally static nature of warfare when it is between irregular factions in the region. Users of the Sayyad generally don’t need to move long distances with their rifle, so the weight and length of the rifle are less of an issue.

.50 caliber sniper rifles have seen incredible proliferation in the twenty-first century. They are used in almost every hot zone around the world, from the Middle East to Ukraine. But in the Middle East, one rifle stands out from the pack. The Austrian Steyr HS 50 and various copies of it are by far the most common, beating out American Barretts, Serbian M93s, and other Chinese .50 caliber rifles. But how did a rifle made in Western/Central Europe end up being so popular in the Middle East?

The story of the HS 50 may provide clues to its runaway success. Despite being produced and marketed by Steyr, the HS 50 was not originally designed by Steyr’s design team. Rather, Steyr commissioned a German designer, Heinrich Fortmeier to build a .50 caliber single-shot rifle for them. The resulting HS 50 was first demonstrated at the 2002 SHOT Show. Steyr’s commissioning of a rifle from an independent designer might stem from their fatigue of the concept of a heavy anti-materiel rifle. Only a few years earlier, Steyr designed the advanced 15.2 IWS 2000 anti-materiel rifle, which failed to sell.

Luckily for Steyr, the HS 50 was a success. At some point, the rifle was adopted by the Austrian Armed Forces, the Bundesheer. It’s unclear when this happened, or if the Bundesheer only adopted the HS 50M1 model, which comes with a 5-round magazine. But an article about Bundesheer sniper squad sfrom 2004 makes mention of “Schweres Scharfschützenwaffensystem,” which roughly translates to Heavy Sniper Weapons Systems, which suggests that the Bundesheer adopted the HS 50 around that time.

But the HS 50’s big break would be when Steyr sold 800 HS 50 rifles to Iran in 2005. Nominally, these rifles were to be used by Iranian police organizations to shoot out the engine blocks of smugglers at Iran’s borders. But expectedly, Iranian defense organizations started producing copies of the rifle called AM-50 Sayyad. Sayyads are used by the Iranian military and paramilitary organizations and were distributed to Iranian proxies and Iranian-aligned militias across the entire Middle East region.

The rifles are popular due to the generally static nature of warfare when it is between irregular factions in the region. Users of the Sayyad generally don’t need to move long distances with their rifle, so the weight and length of the rifle are less of an issue. Snipers in the theatre also tend to shoot from murder holes in buildings, with a dedicated room for the muzzle to expend their gasses into, so the extremely large firing signature of .50 caliber rifles are mitigated. The armor-piercing capability of common .50 caliber rounds is also appreciated when fighting uparmored vehicle borne IEDs, though .50 caliber sniper rifles are not the most reliable way to stop such attacks.

While those characteristics apply to .50 caliber rifles in general, the HS 50 has qualities that make it ideal for use by militias. Compared to other .50 caliber rifles, the HS 50 design is incredibly simple. The famous Barrett M82/M107 semi-automatic rifle has a complex recoiling barrel mechanism to reduce the amount of recoil given to the shooter. Even regular magazine bolt actions have issues in the austere conditions in the Middle East. A video by a Polish volunteer Peshmerga sniper shows the sniper struggling to feed a fresh round with the bolt on a Serbian M93 rifle. The HS 50 has none of those mechanisms, being a single shot bolt action. This extreme simplicity makes it very light and easy to repair.

Sayyads have already become infamous weapons due to their effectiveness. Abu Tahseen, an Iraqi Popular Mobilization Unit sniper, was reported to have killed over 320 ISIS members at the time of his death in 2017. He is seen using a Sayyad rifle in photos and videos prior to his death. While Steyr has since moved on from the original HS 50 design, variants of the rifle will likely be seen in combat zones in the Middle East for years to come.