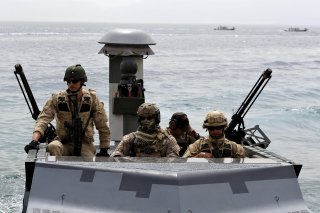 We may be closer to making Captain American than Iron Man

On screen, Captain Rogers’ transition from slim to studly may seem more unbelievable than Tony Stark’s Iron Man suit, the truth is, it would likely be much easier to field an army of Captain Americas than an army of Iron Men. There are already many robotic exoskeleton programs underway across the globe, but for the most part, many of these programs face the same fundamental challenges; chief among them has to be the issue of power storage.

Today’s lithium ion batteries are far more capable than batteries of the past when it comes to running our cell phones, cars, and even some military submarines, but battery technology today is still nowhere near what it would need to be in order to power anything close to Iron Man’s suit. Even if you were to eliminate flying (which you would need to do), the power requirements to move around in an armored exoskeleton would almost certainly mean having to stay tethered to an industrial power supply.

Nearly ten years ago now, U.S. Special Operations Command announced plans to build an Iron Man suit of their own called TALOS to a great deal of fanfare. Suddenly, the idea of Navy SEALs kicking in doors dressed like War Machine seemed so feasible that they even released an official video that looked an awful lot like they were planning to do that very thing.

But by 2018, SOCOM chose to cancel the program, and while some elements of it are sure to live on under other developmental banners, the decision to shut down TALOS was almost certainly informed by just how hard it is to make a robotic suit that can power itself and be so reliable we could stick a human operator in one under enemy fire.

Exoskeletons are still finding their way into service, however, like China’s that has been deployed in their high-altitude standoff with India, or the Sarcos Defense Guardian XO Alpha robotic exoskeleton currently being tested by the U.S. Marine Corps. Neither of these suits boasts armor, however, and are both intended only for increasing endurance or moving boxes on and off a truck.

So who will have a super soldier serum first?

It seems unlikely that anyone will field a single injection or treatment that could produce all, or even some of the possibilities listed above, but we may not be all that far off from experimental super soldier programs becoming a reality. The only problem is, it seems far more likely that we’ll see these programs produce a Captain China well before we ever see our favorite hero in blue tights. That’s not necessarily because America is behind the technological curve, but rather because of America’s tenacity for self-policing.

From biological and nuclear weapons to autonomous killing machines, mankind is already capable of developing and leveraging literal nightmares on the battlefield. Increasingly, scientists are finding themselves not only asking if they can do something but if they should. It’s in this dilemma that America may truly find itself at a strategic disadvantage. Of course, America has a history of questionable and even downright loathsome experimentation for military or intelligence applications, but our government is still largely beholden to public opinion.

China doesn’t have the same handicap thanks to a censorship stranglehold on all media and internet activity, and of course, the appointment of President Xi Xinping as the nation’s leader for life. China’s populous is far more accepting of human rights abuses (as demonstrated by China’s Xinjiang internment camps) and far less apt to sway military endeavors with popular opinion.

And the suggestion that China is willing to take these chances while Americans debate their moral and ethical implications isn’t an unfounded one. In December of 2020, America’s Director of National Intelligence, John Ratcliffe, announced in no uncertain terms that China has already begun the sorts of human testing we’d file under the “super soldier” banner. In a recent Op-Ed for The Wallstreet Journal, Ratcliffe said that China has already begun “human testing” on members of the People’s Liberation Army with the intention of developing soldiers with “biologically enhanced capabilities.

And he’s not the only one. Other academics have already been discussing China’s apparent use of the gene-editing tool CRISPR, which is short for “clusters of regularly interspaced short palindromic repeats.”

“While the potential leveraging of CRISPR to increase human capabilities on the future battlefield remains only a hypothetical possibility at the present, there are indications that Chinese military researchers are starting to explore its potential,” wrote Elsa Kania, an expert on Chinese defense technology at the Center for a New American Security, and Wilson VornDick, a consultant on China matters and former U.S. Navy officer in a peer-reviewed paper for The Jamestown Foundation.

Like China’s massive military modernization effort, their rapidly expanding 700-ship Navy, and foreign infrastructure programs like the Belt and Road Initiative, China has made it clear that they aim to dethrone the United States as the economic and diplomatic center of the developed world. Competition doesn’t make them villainous, of course, but their disregard for international norms and human rights violations arguably do.

“There are no ethical boundaries to Beijing’s pursuit of power,” wrote Ratcliffe.

So, while the United States is certainly not ignoring the potential for biological and technological means to develop real-life super soldiers, it seems likely that other nations will lead the way in this endeavor. It’s important to note that this observation is not an endorsement for America to take a less ethical approach to modifying its troops. Rather, it’s meant as a means of recognizing the nature of threats on the horizon in a pragmatic way. Acknowledging China’s industrial advantage regarding warship construction isn’t a condemnation of America’s own infrastructure any more than recognizing their potential advantage in this ethical conundrum is an attack on America’s guiding principles.

For now, it seems all but certain that future battlefields will see super soldiers of one form or another — be they genetically, biologically, or technologically modified (or perhaps all three). Being first doesn’t always mean best, and like every arms race before it, there’s sure to be a few surprises along the way.