The Real Top Gun: Why the F-22 Remains Supreme in Air-to-Air Combat 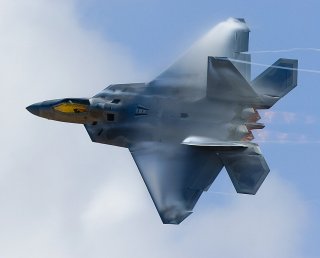 Here's What You Need To Know: Numerous upgrades have ensured that this decades-old jet fighter remains the most powerful air dominant platform in air-to-air superiority.

What is the reason why so many regard the now decades-old F-22 Raptor as the most dominant air dominance platform when it comes to air-to-air superiority?

The answer partly resides in the fact that today’s F-22 stealth fighter is quite different from the aircraft which first emerged in 1997.

The largest difference with the latest upgraded F-22s may be found in a series of weapons upgrades made possible in recent years through software advances.

The F-22 is now operational with two new weapons, which have been under testing and development for several years now. They are advanced variants of existing weapons - the AIM-9X air-to-air missile and the AIM 120-D.

The new AIM-9X will shoot farther and reach a much larger targeting envelope for pilots. Working with a variety of helmets and display systems, Lockheed Martin developers have added “off-boresight” targeting ability enabling pilots to attack enemies from a wide range of new angles.

Another part of the weapons upgrade includes engineering the F-22 to fire the AIM-120D, a beyond visual range Advanced Medium-Range Air-to-Air Missile (AMRAAM), designed for all-weather day-and-night attacks; it is a "fire and forget" missile with active transmit radar guidance, Raytheon data states. The AIM-120D is built with upgrades to previous AMRAAM missiles by increasing attack range, GPS navigation, inertial measurement units and a two-way data link, Raytheon statements explain.

The F-22 has also been upgraded with two-way LINK 16 datalink technology, enabling the aircraft to both send and receive information with the F-35. Having a digital ability to transmit fast-changing, combat relevant targeting information from an F-22 cockpit - without needing voice radios - lessens the risk associated with more “jammable” or “hackable” communications.

Newer F-22s have a technology called Synthetic Aperture Radar, or SAR, which uses electromagnetic signals or “pings” to deliver a picture or rendering of the terrain below, allowing better target identification. The SAR technology sends a ping to the ground and then analyzes the return signal to calculate the contours, distance and characteristics of the ground below.

A Plane That Can Evolve

The fighter jet also fires a 20mm cannon and has the ability to carry and fire all the air-to-air and air-to-ground weapons including precision-guided ground bombs, such as Joint Direct Attack Munitions called the GBU 32 and GBU 39.

The aircraft was first introduced in December of 2005; the F-22 Raptor fighter jet delivered some of the first strikes in the U.S.-led attacks on the Islamic State in Iraq and Syria, when aerial bombing began in 2014.