This Is Really a Gun: Meet the P-90 (As Seen in Hunger Games) 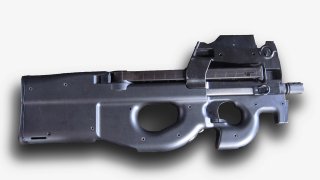 Here's What You Need to Remember: The P-90 personal defense weapon (PDW) was developed for NATO in the mid-1980s as a compact but powerful firearm for vehicle crews, operators of crew-served weapons, support personnel, special operators and counter-terrorist teams.

The Belgian made FN P-90 is a go-to weapon today – not just for the forty-some international police and military users around the world – but for movie and TV armorers who desire a "futuristic" looking yet compact submachine gun. It can be seen in such films as The Hunger Games and Looper, as well as in sci-fi TV series such as Stargate: SG1, V and episodes of Doctor Who. It likely had such prominent placement in pop culture because it has a profile that is very much unlike modern submachine guns.

However, the P-90 personal defense weapon (PDW) was developed for NATO in the mid-1980s as a compact but powerful firearm for vehicle crews, operators of crew-served weapons, support personnel, special operators and counter-terrorist teams. It was arranged as a "bullpup" assault weapon, where the action and magazine feed are concentrated aft of the trigger unit, and this allows a full-length barrel to be utilized in a more compact package.

Typically with bullpups the magazine is located in the underside of the stock, but designer Stephane Ferrard placed the transparent magazine on the top of the weapon. This resulted in a fixed, slightly oversized stock that included an integrated pistol grip and carrying handle. The weapon is just 19.9 inches in length and unloaded weapons just 5.7 pounds.

The P-90 was developed with a new 5.7x28mm SS90 round to replace the aging 9x19mm Parabellum. The ammunition's designers Jean-Paul Denis and Marc Neuforge sought to create a new round that would suffer less recoil yet retain adequate stopping power.

In addition to being chambered for that new cartridge, the weapon also featured that unique top-mounted horizontally fed magazine, designed by Rene Predazzer. It incorporates a spiral feed way that rotated each cartridge before it entered the weapon's action. The translucent magazine, which is made of polycarbonate, also enables the operator to see how many rounds are still left.

It features a straight blowback action and operates from a close bolt, with a rate of fire of 900 rounds per minute and a muzzle velocity of 2,350 feet per second. It has low recoil and muzzle flash while still being effective to ranges out to 656 feet. Another significant advantage of the P-90 is that it was designed to be easy to field-strip and could break down into just four major components.

Despite being developed to address a specific need for NATO, it took nearly a decade for it to be fully evaluated and in the end, Germany rejected the trails' recommendations. Despite that fact, it has been used in a variety of military, security and police roles. Two major variants including the P90 Standard the P90 Tactical have been developed, and these have been adopted by such nations as Austria, Brazil, Canada, France, Greece, India, Malaysia, Poland, and the United States. In America, it is used by more than 200 law enforcement agencies including the U.S. Secret Service.

The standard selective-fire version has always been restricted to military and law enforcement in the United States, but in 1995 FN released at semi-automatic version, the PS90, in 2005 with civilian legal 16.04-inch cold hammer-forged MIL-SPEC Barrel and integrated muzzle brake to reduce recoil.

For everyone else, it can still be seen in movies and on TV.

This article first appeared April 22, 2020 and is being republished due to reader interest.