The Redskins Are No More (And That Is a Good Thing) 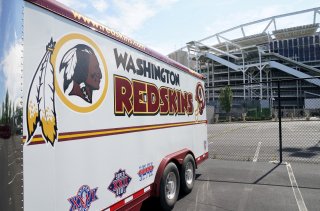 The Washington Redskins, facing increased public and financial pressure, have finally announced they will change their team nickname. This decision puts an end to almost 30 years of active protest and litigation against the National Football League franchise.

Following the brutal killing of George Floyd by police in Minneapolis on May 25, the Black Lives Matter movement effectively mobilized the world to stand united against racialized acts of violence.

The idea of sports teams changing their racist logos, names or brands became part of the campaign against systemic racism, though it is not new. Since 1969, 14 North American sports teams have removed their names or logos that were outwardly racist towards First Nations and Native Americans.

In 2014, in the Amanda Blackhorse vs. Pro Football Inc. case, the United States Patent and Trademark Office ruled that the Washington NFL team’s name was disparaging to Indigenous Peoples.

At the time, Amanda Blackhorse was interviewed by journalist Steve Paikin on The Agenda. She said the Washington Redskins mascot name is an outwardly racist, offensive and disparaging slur.

Four years later, the Supreme Court ruled in favour of allowing the team to use the name. Blackhorse told USA Today:

“We said the term ‘Redskins’ is disparaging and the courts agreed with us … it’s just that now the Supreme Court says it’s OK to register a disparaging term.”

The Redskin controversy dates back to 1775 when a document called the Phips Proclamation named after Spencer Phips, a British politician and then Lieutenant Governor of the Massachusetts Bay Province, placed a bounty on the heads of Penobscot Indians, a tribe now based in Maine. A “Redskin” was said to be a scalped head of a Native American, sold, like a pelt, for cash.

Similarly, up until 2019, the Cleveland Indians major league baseball team used a cartoon character called Chief Wahoo. Wahoo was depicted as a Redskin, who is often ridiculed in ways that are offensive to Native Americans.

The problem with opinion polls

A 2019 poll conducted by Angus Reid said that more than half of Canadians believe sports franchises that use Indigenous naming and imagery should not have to change.

The word mascot originates from the French, mascotte, which means my lucky charm. Mascot also has several derivatives, including maso, meaning witch or sorceress; mascoto, meaning spell or bewitchment. It has been associated with inanimate objects that were commonly seen as either a lock of hair, a figurehead on a sailing ship or good luck animals used to represent one’s group identity.

In modern sport, mascots are used for good luck. But they are also used to build merchandising revenue, meet monetary targets and increase the fan base. Team mascots often take the form of a logo, person, live animal, a costumed character or other inanimate objects.

But what happens when team mascots are used to misrepresent or misappropriate groups of people who then feel constantly ridiculed, violated and delegitimized as human beings because of the way team mascots are paraded, adorned and validated?

The National Congress of Indians (NCAI) published a database in 2013 which found more than 2,000 secondary schools with mascots that reference Native American culture, compared to around 3,000 from 50 years ago. Since the 1960s, the NCAI has been a powerful advocate for spearheading laws and regulations that Native logos need to end everywhere.

Racially constructed names pertaining to the Braves, Chiefs, Redskins, Indians, Blackhawks and Seminoles remain a point of contention among many Indigenous Peoples living in Canada.

Earlier this year, the Edmonton Eskimos of the Canadian Football League decided against changing their name — but then said in July it was reassessing the name once again. The team said its original decision was based on the premise that it had consulted with the Inuit community who stand by the name “Eskimos.”

But the Inuit are not Eskimos, and according to fluent speaking Inuit members, Eskimos means “meat eater,” not Inuit.

But elsewhere, other teams are changing racist names. The amateur Saanich Junior B “Braves” hockey team on Vancouver Island recently decided to change its name out of respect for First Nations Peoples.

Mana-munching is not our way

Anything less diminishes the mana of a people.

Mana is a word well known and used among many Indigenous Peoples of the Pacific and North America. In Hawaii and New Zealand, for example, mana means the spiritual energy, healing power or essence a person carries with them from one generation to the next. To disrespect, demean or desecrate a person’s mana in any way is to diminish who they are, and in doing so to dishonour all they are and can be – this is not our way.

A more respectful approach to enhancing the mana of a person, as articulated by performer and researcher Te Ahukaramū Charles Royal, is the idea that we should all work together to hold each other up so that a person can realize their full potential.

To mana-munch a person’s spirit through disparaging, racist and misappropriated mascots and branding is nothing short of dehumanizing the legacy of the living, their ancestors and those yet to be born. It is an intergenerational practice Indigenous Peoples know only too well and is an integral part of our identity and who we are as human beings.

Mascots that enhance the mana of all people rather than diminish them is the preferred teaching because it impacts every aspect of our society or world. In this era of Truth and Reconciliation, we can work together to reconcile our differences, repair the past and heal. Team mascots have a role and responsibility to respect the living and build positive relationships that can enhance the spirit of sports we all love and enjoy.