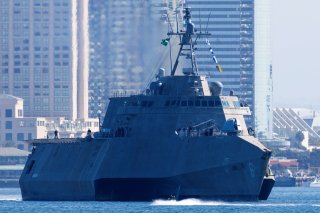 Key Point: War games give us a possible glimpse into future battle plays, and in this future, the U.S. lost.

For more than a hundred years, the U.S. Navy has been using naval wargames to test ships, tactics, and strategy. Today, thanks to the ability of computers to process massive amounts of data, sharply accurate, procedural “hard” simulations are possible.

The LCS was designed to fight close to shore, a characteristic that opens the vessel up to more missions — and challenges — than most Navy ships. For one, they have to be both versatile and agile. The vessels are lightly armed and rely on swappable “mission modules” to increase firepower and other special capabilities such as surface warfare, minesweeping, and anti-submarine warfare.

A normal LCS has a rapid-fire 57-millimeter gun, a pair of 30-millimeter cannons, and heavy machine guns. The ship also has Rolling Airframe anti-aircraft missiles to defend against enemy jets and incoming missiles.

The U.S. Navy is backing up its Philippine allies — two LCSs, USS Freedom and USS Fort Worth, are both about 30 miles south of the Emilio Jacinto and Artemio Ricarde. The USS Halsey, an Arleigh Burke-class guided-missile destroyer, is behind them at an equal distance.

I’m playing the forces of both the U.S. and The Philippines, and fortunately, I have an MQ-4C Triton in the area — the naval version of the Air Force’s Global Hawk drone. I send the Triton over the shoal to get an idea of what’s down there.

Moving at more than 40 knots, Fort Worth and Freedom begin closing the gap.Qinzhou and Changde both turn to face Fort Worth. Apparently, they want to fight. I’ll oblige them. Both LCSs are under orders to engage the enemy as soon as they come close enough to fire their Griffin surface-to-surface missiles. Between the two of them, they have 30 Griffins.

At 5.7 miles, Freedom reports there is light damage and major flooding on the already wounded Changde. She opens fire with the 57-millimeter gun, quickly scoring several hits. Changde’s gun must be damaged because it is not opening fire.

At a distance of three miles, the Griffin missiles launch. It’s about time, because of the 57-millimeter gun jams. Changde already has a medium-sized fire and major flooding. Several Griffins malfunction but most score hits onChangde.