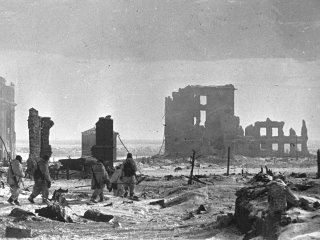 After the Red Army stopped the Nazis at the Volga, they would push the Germans back, relentlessly, for the next two years, culminating with the destruction of Berlin, the death of Adolf Hitler and the end of the war.

Of the 90,000 Germans that went into Soviet captivity, fewer than 6,000 would live to see their homeland again, and those didn’t come until the mid-1950s.

However bad and inhumane we believe the wars in the Middle East have been for the past five years — and they have been horrific, especially for the poor civilians caught in the middle — they are a mere shadow of wars past.

Daniel L. Davis is a retired U.S. Army colonel who served multiple tours in Afghanistan. He is a senior fellow with Defense Priorities. Follow him on Twitter at @DanielLDavis1.

This article by Daniel L. Davis originally appeared at War is Boring in 2016.