Revealed: America Has Secret Nuclear Bunkers Built Within the Earth 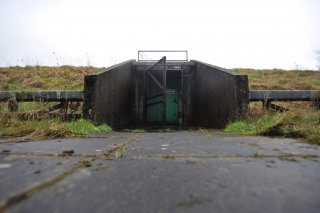 Here's What You Need to Remember: As aircraft became faster and missiles faster still the warning times for nuclear attack shrank from hours to minutes.

With the arrival of the Bomb and its immense destructive power, the efforts to protect elites and commoners alike from swift destruction assumed novel and at times grotesque forms. Civil defense foundered in America upon the sheer scale of the problem—getting tens of millions of urbanites out of cities and into shelters before enemy nukes arrived. Ultimately the United States quietly gave up on protecting the majority of its residents from nuclear attack via shelter, and opted for a grand technological fix in missile defense.

Elite shelter concepts, however, had better success. Ostensibly, this makes sense; targeting the enemy leadership can sometimes win a struggle. The assassination of Admiral Yamamoto by the U.S. Navy in 1943, for example, derailed Japan’s defense of its island conquests. But such a policy opens a door into a very dark room, as many leaders instinctively know.

So from early on in the Nuclear Age, the U.S. government explored numerous ways to keep itself safe during and after Armageddon.

The Greenbriar Resort in West Virginia, a grand old vacation destination abounding in stately elegance, now includes a Cold War extra amongst a tour of its premises: the congressional bunker built in the late 1950s under the guise of a resort expansion. The Greenbriar bunker is a true time capsule, its rotary-dial phones and fusty office chairs ready for the cast of a period movie.

The Greenbriar bunker was never used for its intended purpose and was decommissioned in 1992 after a news expose. When members of Congress evacuated the Capitol on September 11, 2001, they flew to the Mount Weather emergency command facility in the Blue Ridge Mountains. Now run by FEMA, Mount Weather can shelter several hundred people from all three branches of government for months.

Along with Congress agencies such as the Federal Reserve made accommodations for apocalypse, including giant vaults full of currency. As Strangelovian as it sounds, the work of returning American society to some semblance of pre-war routine would depend on cash and banking.

As aircraft became faster and missiles faster still the warning times for nuclear attack shrank from hours to minutes. Even as Greenbriar and Mount Weather were conceived and built,  the evolving threat demanded more urgent safety measures. As Mark, the author of Atomic Skies blog writes:

“Two solutions were considered: mobility and hardness. Mobility meant keeping the president on the move, on plane or train or ship, so that the Soviets could not find and kill him. Hardness meant burying the president, deep underground, deeper than even a nuclear weapon could reach.”

Early in the Eisenhower administration a plan was devised to spirit the president away from Washington aboard a fast Navy boat down the Potomac (helicopters being then too unreliable for Presidential transport) to a waiting Navy ship, which would head to sea. The naval aide in charge of this plan, Captain Edward Beech, later commanded a nuclear sub, the USS Triton, big enough to function as “Navy One”—a submerged presidential command post.

During the Kennedy Administration mobile solutions expanded to include airborne command posts—first 707s then 747s—capable of supporting the executive branch during and after World War III. Spiriting away the President into the sky remains the preferred option.

But if ICBMs left no time to get the President and other leaders to safety, then only the deepest of bunkers would suffice. In 1963 the Pentagon proposed a whopper: the Deep Underground Command Center (DUCC).

DUCC would have been a shock-mounted capsule dug into the living rock 3,500 feet below the nation’s capital, accessible by tunnels from the White House, Capitol Hill and the Pentagon. Up to three hundred people could shelter there for up to a month after bombardment by three-hundred-megaton warheads. Evacuation would take only fifteen minutes, enough time even with minimal warning.

But there were problems. The DUCC was small and half its personnel would be needed just to keep the shelter running. It was expensive, costing as nearly much as all the mobile command posts combined. It wasn’t certain that the Soviets couldn't just build bigger bombs. Contact with the outside world would be tough if the explosions vaporized the communications antennas.

And there was, at least among some of President Kennedy's advisers, just a little uncertainty about the Pentagon’s views. “Basically,” said Harold Brown, a future Secretary of Defense, “the Chiefs probably aren’t interested in having the civilian command survive. If we were to come to a war, they would only get in the way.”

The Joint Chiefs’ lack of enthusiasm and the Vietnam War, along with a general slide in American focus on civil defense, led to the DUCC proposal fading away by the mid 1960s. The flying and floating command posts were upgraded and existing facilities like Mount Weather were hardened. But, writes Mark, during the Carter Administration the Army Corps of Engineers revisited the concept.

We know they did because a few scraps of evidence surfaced before the project ended/evaporated/went dark:

“Special Projects Office (later to become the Protective Design Center) was created in 1977 to work on a classified Department of Defense program. The Alternate National Military Command and Control Center Improvement Program involved criteria development, studies, and preliminary design of a deep underground highly hardened and survivable command and control center. The center included separate structures for command personnel, power, fuel, and water. Over 3 miles of air entrainment tunnels were required as well as access shafts to the surface.

“Although canceled in 1979, the experience, expertise, and leadership in protective design and classified programs that Special Projects gained from this work brought other unique projects and major programs to the District.”

The one photo associated with the project depicts a model of a spherical structure like a buried moon base, cocooned in rock and encased in a lattice of shock absorbers. It looks very safe. It doesn't look cheap. And nothing more is known about it.

So are there deep bunkers carved into the American soil still hiding in the dark? Vast sums have been spent since 9/11 and much is unaccounted for. But the same concerns that kept super bunkers from being built - cost, capacity and effectiveness—mitigate against any grand caverns of doom.

Steve Weintz, a frequent contributor to many publications such as WarIsBoring, is a writer, filmmaker, artist, animator. This article is being republished due to reader interest.