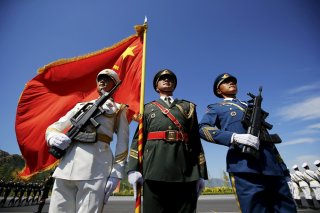 The Chinese military’s rapid expansion and modernization efforts in recent years are certainly expensive, but somehow, China claims to devote less than a third of America’s defense budget to their own military endeavors.

Despite this significant disparity in spending, over the past two decades or so, China has managed to field the largest naval force on the high seas, maintain the largest standing army on the planet, close the gap in stealth aircraft technology, and field hypersonic weapons America has yet to match.

So what gives? How has China managed to match and even surpass America’s military capabilities in some realms while keeping its defense spending at less than America allocates each year to interest on federal debt alone? The truth is, it takes a combination of creative bookkeeping, outright dishonesty, and some pretty serious cut corners in the personnel department.

The most important difference between China’s People’s Liberation Army (China’s military) and America’s Defense apparatus, however, is in the breadth of global obligations each force is on the hook for. America’s military serves as a stabilizing presence the world over, with ships, aircraft, and troops operating in countless environments in support of a network of allied nations. China’s military, on the other hand, has a more regional focus, with the breadth of the nation’s military might concentrated in the Pacific, and in particular, the South China Sea.

China actually spends more than it claims on its military

Estimates from foreign observers, however, place China’s defense spending at a fair bit higher than they claim, though to be fair, still nowhere near America’s $700 billion+ figures. In 2019, China’s claimed defense budget was $178 billion, but analysts at the Stockholm International Peace Research Institute (SIPRI) estimated it to be closer to $261 billion. In 2018, China claimed $167 billion, and again, the SIPRI analysts’ math came out to be closer to $254 billion.

That means China may have under-reported its defense spending by 37% in 2018 and a whopping 41% in 2019. Analysis at the International Institute for Strategic Studies (IISS) also found that China’s figures appear inaccurate, though their own estimates ring in slightly lower. Per their figures, China undersold its spending by about 30% in 2019.

Further complicating matters is China’s intentional efforts to categorize or otherwise misrepresent spending on paramilitary organizations as specifically not military spending. These organizations include China’s vast militia and maritime militia, its militarized Coast Guard, and even the People’s Armed Police (PAP) force. Of course, the United States also maintains a large police force, but this is where terminology can intentionally or unintentionally muddy the waters. China’s People’s Armed Police don’t answer to their local governments. Like other military bodies, they strictly answer to the nation’s Central Military Commission (CMC).

In 2019, for instance, the acknowledged budget for China’s military-operated PAP was another $28.5 billion that went unaccounted for in their defense figures, despite the PAP being a military body.

China’s Xinjiang Production and Construction Corps, also known as the XPCC, is another unique facet of the Chinese military footprint. While their responsibilities include a number of governmental functions and the obvious infrastructure construction projects one might expect, each of its more than 2 million members went through basic military training upon joining. The XPCC is the element of China’s military responsible for building and operating the Xinjiang internment camps that China forces Uyghurs and other ethnic minorities into.

China’s maritime militia fleet is estimated to be in the hundreds of vessels as large as 500 tons, and its conventional militia maintains approximately 8,000,000 troops in itself. None of this is included in China’s official Defense budget. Even China’s National Space Administration, comparable to America’s NASA, is actually a military body that functions as an extension of the nation’s defense apparatus.

China pays its military a fraction of what the US pays

China’s defense budgets also benefit from a lower standard and cost of living among its troops. While you won’t find readily available charts of Chinese military salaries by pay grade like you will with American troops, there are some publicly available figures we can use for comparison.

In January of 2021, the Chinese government announced that members of the People’s Liberation Army (PLA) will receive a 40% increase in their pay before the year’s end. As a means of showing how significant that is, Chinese media outlets quoted a colonel who requested anonymity.

One Chinese yuan is worth approximately 16 cents in American currency. That means a colonel in China’s People’s Liberation Army makes around $3,105 per month, or about $37,260 per year. In another report penned by Dr. Marcus Clay at China Aerospace Studies Institute, he explained how the Chinese equivalent of a Brigadier General in the U.S. Army makes under $42,000 per year.

For context, American service members receive both basic pay and entitlements in various forms, some of which are based on dependent status, location, and type of duty. A married Marine Private First Class (E-2) with less than 2 years of service stationed aboard Camp Lejeune, North Carolina will take home $2,000.70 in basic pay, $386.50 for Basic Allowance for Subsistence, and $1,263.00 as their Basic Allowance for Housing. Combined, that comes to $3,650.20 per month, or about $43,800 per year.

That means a brand new Marine with a spouse, stationed aboard one of the nation’s largest military installations, makes more money per year than a full bird colonel in the Chinese military.

This also doesn’t take into account other personnel costs, such as veterans’ benefits. To date, the Chinese government has no veterans administration or similar organization to offer such benefits.

Chinese troops do not recieve nearly as much training

China’s defense apparatus doesn’t just spend less per soldier on pay and benefits, they also spend significantly less on training their troops. Whether we’re talking about enlisted door-kickers or Top Gun fighter pilots, Chinese troops see substantially less training on their way to their military occupations, and then consistently receive less training throughout the extent of their military careers.

This disparity in training time is particularly conspicuous among the fighter pilot ranks. Per changes to their pilot training pipeline instituted in 2020, PLA pilots have about 278 flight hours under their belts before they’re given their first assignment to a combat-ready unit. American fighter pilots, on the other hand, spend between 250 and 300 hours flying before they even transition into the type of aircraft they’ll fly in service. This experiential disparity only grows from there.

The number of hours American fighter pilots spend flying their respective aircraft each month varies by branch, location, and aircraft availability, so using ranges may be more appropriate than hard numbers when assessing ongoing training time.

Last year, fighter pilots in the U.S. Air Force averaged between 228 and 252 hours of flight time in their aircraft. Chinese pilots, on the other hand, saw between 100 and 110. American pilots, then, often have more than double the flying experience of their similarly aged peers in the PLA. It’s important to note that budget restricts training hours. A single F-22 Raptor, for instance, costs Uncle Sam about $70,000 per hour to fly, so training costs add up quickly.

The same goes for the rest of China’s People’s Liberation Army personnel. In 2018, China doubled its training timeline for PLA troops from three months to six months. Upon completion of that six-month training period, troops report to their respective units, where they’ll be expected to learn their jobs as they do them.

Training time varies dramatically for U.S. troops, with a handful of occupational specialties in different branches getting troops to their duty station in six months to a year, and some other training pipelines lasting two years or longer. All U.S. troops, however, receive some degree of occupational training prior to reporting to the first unit.